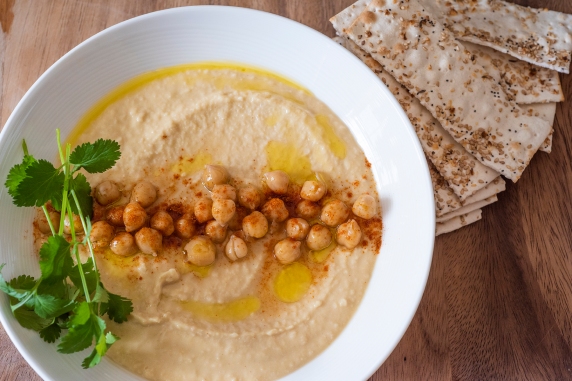 It’s no secret that we here at Quiet Farm are big fans of the humble bean. We’ve discussed this before, of course; beans are high in protein and fiber, both of which help keep you full longer and keep your digestive tract functioning properly. If you’re looking to eat less meat, beans make a terrific whole-food alternative (unlike many of the processed soy patties now masquerading as meat). They’re cheap, easily available, store forever in the pantry, simple to cook and often local; it’s no wonder I make a pot of beans every three or four days.

Today, though, let’s talk hummus. There are a few foods that I firmly believe will always be better when you make them yourself – for me, that’s granola, yogurt and hummus. Of course you can easily buy all of these things at the grocery store, but hummus is surprisingly expensive for what it contains, and it will take you all of ten minutes to make a batch. You might find yourself making a batch once a week. And it’s so simple that hopefully you’ll read this entire post before realizing that I managed to avoid giving you a recipe…because hummus is more of a concept than a true recipe. 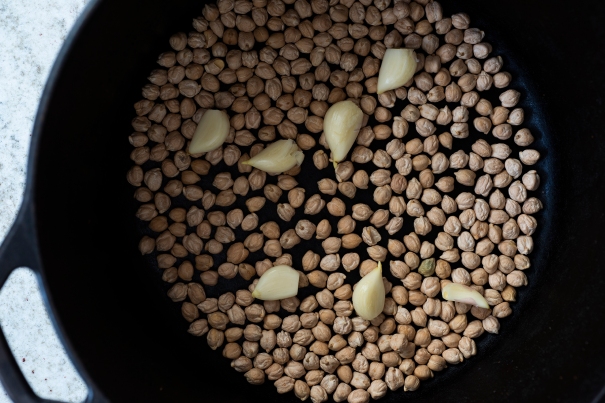 Just like granola, there are a million different ways to make hummus. At its heart, hummus is simply pureed chickpeas (also called garbanzo beans or – rarely – ceci beans) with olive oil and garlic. Some recipes are heavy on the tahini, others bright and tart with plenty of fresh-squeezed lemon juice. Fresh herbs are an option, as is hot sauce or chile powder or just about anything else you can puree. As always, I don’t subscribe to the theory that there is one right way to make something; I believe cooking is intensely personal, and that you should cook for yourself, not for the Internet. The best hummus is the one you love and make regularly.

I make our hummus from dried chickpeas, because I always have these in the pantry along with lots of other dried beans and pulses. As we discussed in our previous bean post, I skip the pre-soak and simply cook the beans in my slow cooker on low, covered in salted water, until tender. You can definitely make hummus from canned chickpeas; I recommend draining these, reserving the liquid, then rinsing the beans well.

You might have seen hummus recipes that call for adding baking soda to the cooking water. The baking soda alkalinizes the water, which helps the chickpeas soften and cook faster. It also typically allows the skins to be easily removed, which makes for a smoother puree. I’ll step right up and say that although I’ve tried the baking soda method, I didn’t love the results so I no longer use it. If you’ve tried it and you’re happy with how your chickpeas turn out, then by all means add baking soda (use about 1 tsp. for 1 ¼ cups dried chickpeas). Just know that this trick won’t work if you’re starting with canned beans; the beans need to be cooked with the baking soda. 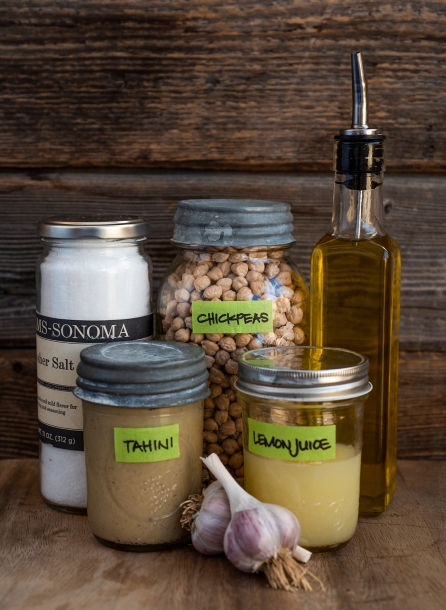 In addition to chickpeas, olive oil and garlic, traditional hummus most often incorporates tahini, or sesame seed paste. If you’re near a well-stocked grocery store or Middle Eastern market, you shouldn’t have any problem finding tahini; it’s usually sold near the peanut butter. Tahini is impossible to find where we live, however, so I make my own the way I do any of our other staple nut butters – in the VitaMix. I keep tahini in the fridge and use it not only in hummus, but in savory salad dressings and baked goods, too. 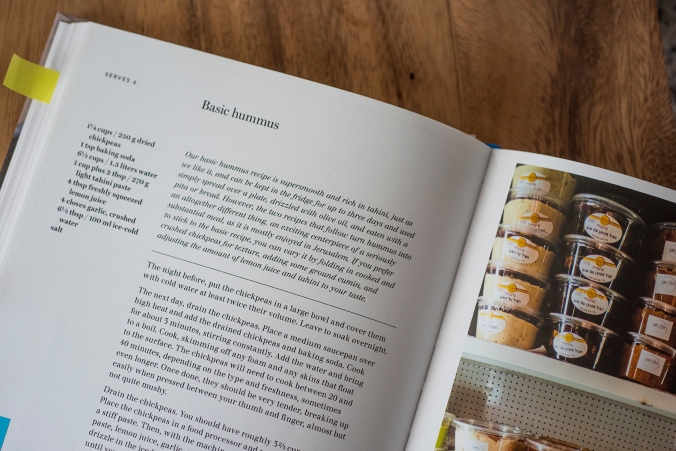 Yotam Ottolenghi, one of my favorite cookbook authors, is generally given credit for popularizing Middle Eastern food in both the U.K. and the U.S. His hummus recipe in Jerusalem calls for an eye-watering 1 cup plus 2 tablespoons of tahini; by weight, the 270 grams of tahini outweighs the 250 grams of dried chickpeas. I tend not to go quite so heavy on the tahini but again, this is your recipe. Add a bit at a time, taste, and adjust as necessary; the slightly bitter, roasted nuttiness of the tahini should balance the creamy chickpeas. 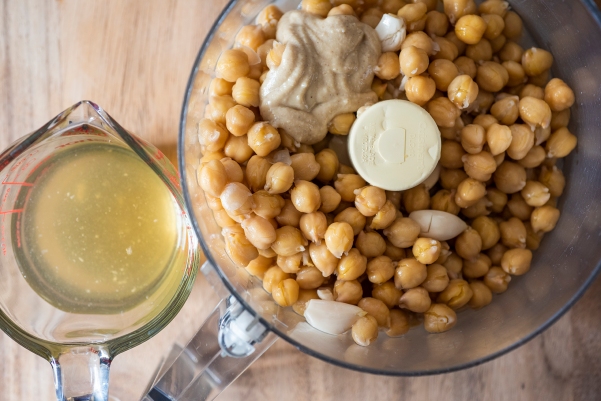 Once your chickpeas are thoroughly soft, it’s a simple matter of removing them from the broth and tipping them into the food processor. If you’re using canned chickpeas, you’re ready to go. Add a dollop of tahini, a clove or two of garlic (in addition to or in lieu of garlic in the cooking pot), a splash of lemon juice and a few grinds of black pepper. Puree this all up, then drizzle in olive oil and/or some of the beans’ broth to thin it to your desired consistency. Leave it a little thicker for a dip or sandwich spread, a little thinner for a grain salad drizzle. Hummus will keep covered in your fridge for at least a week, but it’s best fresh so make it often. And try it warm, too, with just-out-of-the-oven pita bread if that’s available where you live. 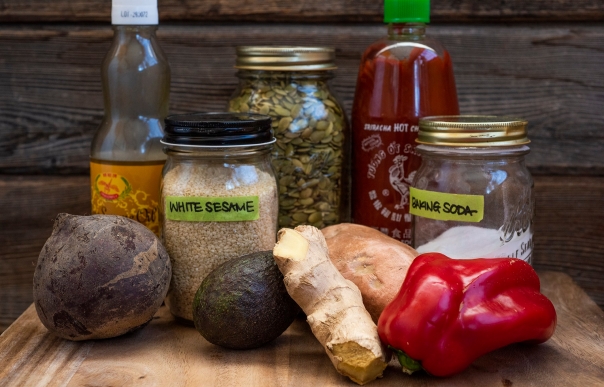 Now you’ve mastered basic hummus, what about all of the interesting ways you could jazz it up? Try roasted red peppers, or sun-dried tomatoes. Add lots of fresh herbs, like parsley and cilantro. Roast carrots with cumin and coriander until soft, and puree those with the chickpeas and a generous pinch of curry powder. Or try that trick with a sweet potato instead of carrots. Include an entire head of meltingly soft, mellow roasted garlic. Add toasted pumpkin seeds for crunch, and garnish with more of the same. Maybe some ripe avocado for a hummus/guacamole mash-up? The sky’s the limit.

A few additional tips before you get stuck in: you want the chickpea cooking water to be well-seasoned, but not overly salty. The liquid will reduce in the cooking pot; when you’re making the hummus, use a careful hand with the salt until you’ve tasted the puree so as not to overdo it. Same goes with the garlic and lemon. If you’re adding in supplemental vegetables, like peppers or tomatoes, make sure they’re well-drained so they don’t water down the puree excessively. Always reserve the cooking liquid to thin the hummus as necessary; the leftover cooking broth can be used as a vegan base for any soup. If you skipped the salt and the garlic and the baking soda when cooking the chickpeas, you can actually use the broth as a vegan substitute for egg whites. It’s called aquafaba and it whips and everything!

Hummus is everything we want in homemade food: healthy, easy to make, infinitely customizable, inexpensive and delicious. We’d love to hear if you make hummus at home! 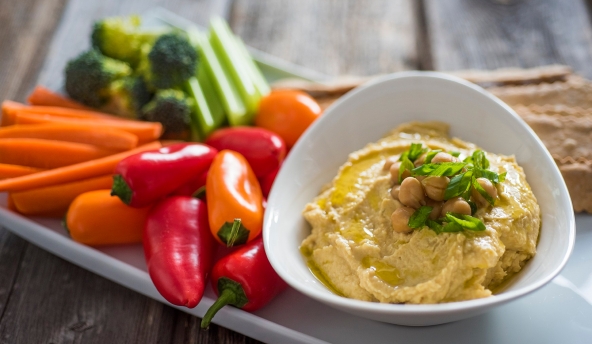 6 thoughts on “How to make hummus”