In ten years of growing food, this is by far the most challenging season we’ve ever experienced. Between punishing hail, voracious deer, late snows, devastating winds, crafty rodents and ten million grasshoppers (I’m certain the locusts are on their way), we feel we’ve taken everything the world can throw at new farmers. We might be down, we might be bruised, but we’re not out yet. And in that spirit, how about we count up some wins? 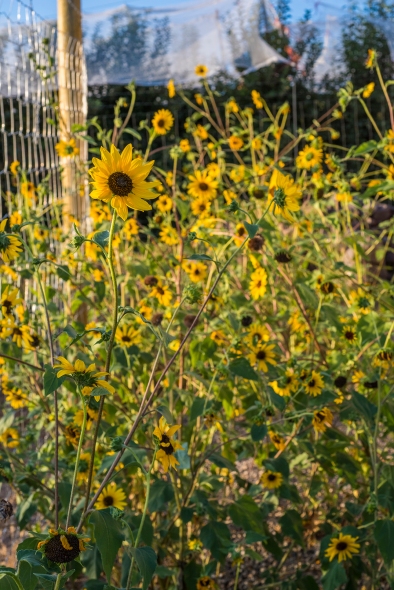 Thanks, sunflowers, for cheering us on with your bright faces.

Our farm is awash in sunflowers right now, not one of which we planted. They weren’t here last year when we moved in (historic drought?), but we’re so glad to see them this year. Hopefully they’ll continue to self-seed and their cheerful countenances will be part of every summer here.

A recent harvest…noticeably missing the shining star of summer produce.

An informal haiku: It is late August / thirty-five tomato plants / not one fruit to eat.  Oh yes, this multitude of plants is absolutely loaded with green fruit. But has even one solitary tomato ripened? No. And I have no idea why. We’ve had hot days and cool nights. They’re protected from pests. I’ve watered, I’ve fertilized, I’ve intentionally drought-stressed, I’ve shouted, I’ve begged, I’ve pleaded. And still, no tomatoes. Fine, then. I’ll just take my chives and cucumbers and eggplant and basil and zucchini and random volunteer squash and red lettuce and fennel and make something delicious anyway. I don’t even like tomatoes. (I do, though. Really a lot. And I very much want to eat some from our farm. Ideally before Thanksgiving.)

Speaking of random volunteer squash, that has been one of this season’s highlights. We’ve got volunteer squash in the compost, in the potato towers and in the new asparagus beds. Considering that the seed hasn’t been tracked it may have cross-bred wildly (is it a summer or a winter squash in the harvest photo?) but when something grows on its own here without being harangued and cajoled, we consider it a win. Thanks, volunteer squash, for proving that our soil isn’t that nutrient-deficient after all.

The largest cloves will be saved for planting in October.

We were pleasantly surprised to find that this year’s garlic harvest was remarkably successful. I threw these cloves into an existing raised bed last fall, then mulched them with straw (don’t do this) and harvested about forty heads a few weeks ago. They’ve been curing in the tractor shed, and now they’re ready for storage. Garlic quickly adapts to its growing location, so every year we’ll save cloves for replanting – and we’re building a new garlic bed, so this fall we’ll plant a lot more than forty cloves. 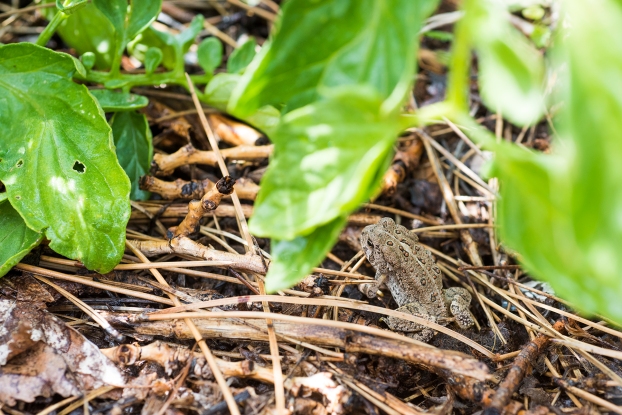 We’ve seen a lot of interesting creatures during our year here, but our first toad spotting was a highlight. Although it’s native to the desert and other semi-arid areas, it needs shallow puddles to lay eggs – so this has to be some indication that we’re irrigating well, right? 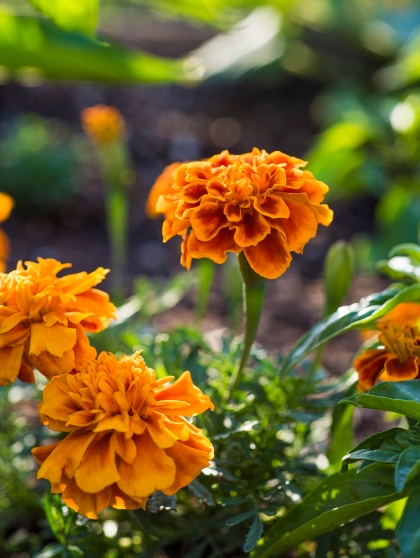 Not really repelling anything, but still pretty.

And finally, we’re proud to say that we grew both marigolds and cosmos from seed this year. I don’t have much experience growing flowers, especially from seed,  so these bright splashes of color in the raised beds have been lovely to see. Marigolds are supposed to act as natural pest repellents – this has totally not worked in our case – but it’s nice to have flowers, anyway.