Of late, our Western Slope farm visits have taken us to pick delicious cherries and to meet happy pigs. How about we introduce you to some unusual sheep? 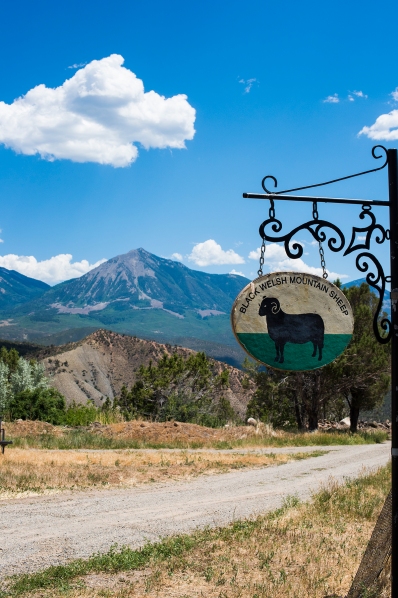 Desert Weyr is perched high on a mesa above the town of Paonia.

In the late 1990s, Eugenie “Oogie” McGuire decided she wanted to craft herself a traditional medieval cloak – from scratch. It would be made from wool, of course. She purchased one ram, five ewes and a loom, taught herself how to spin, weave and sew, and eventually made the cloak. As she says, “It’s more accurate for the 18th century. It took me six years to weave the fabric, two more to get up the courage to cut it, and two weeks to hand-sew it.” But what commitment! Now, Oogie and her husband, Ken, raise a large flock of Black Welsh Mountain sheep on pasture above Paonia.

Black Welsh Mountain sheep are the only all-black sheep in the world; their rich, deep ebony wool is treasured by fiber artists. Rams are impressively horned, while ewes are typically polled, a term referring to livestock without horns in species which are normally horned. Black Welsh Mountain sheep, unlike many breeds, are tough, accustomed to difficult climates and easy to care for; they’re known for excellent lambing, high fertility, and meat that remains tasty even after it’s passed beyond true lamb (over twelve months of age).

Mother and baby out on pasture. 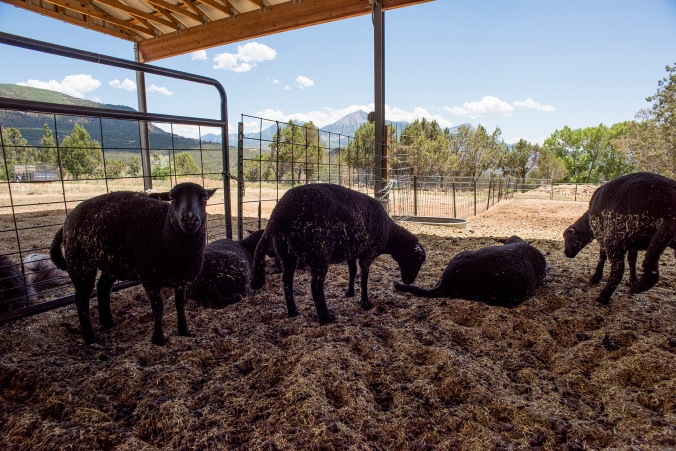 Most of the lamb available in supermarkets and club warehouses here in the U.S. actually comes from New Zealand or Australia. Even with freight and shipping charges, that meat is less expensive. The American sheep industry is infinitesimally tiny when compared to cattle, pigs and chicken; Americans simply don’t eat much lamb. 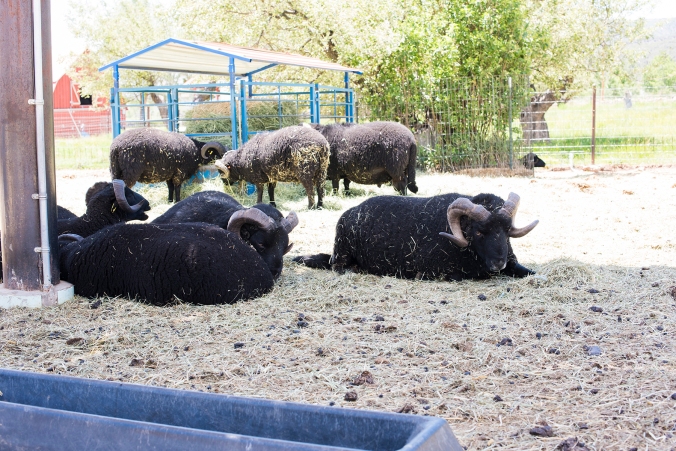 In America, at least, anything we eat labeled as “lamb” is less than one year old – and like much of our food, we definitely don’t want it to have much flavor. True mutton, difficult to find here, is meat from an animal over one year of age. Many people – especially if they were obligated to eat poor-quality, greasy, gamey mutton as children – abhor lamb and sheep meat now, which is a shame because Colorado produces some of the best in the world.

The rams’ horns are used for crooks, buttons and knife handles.

Desert Weyr’s sheep are raised exclusively on forage pasture, with no grain whatsoever. Much American lamb is now grain-finished, simply because Americans prefer the tenderness and marbling associated with grain-finished livestock – that’s what we’re accustomed to – and because the grain cuts down on what some perceive to be a too-strong gamey flavor. But lamb should taste like lamb, and not like beef, and sheep are grazers – their digestive systems aren’t designed to thrive on grain. Sheep can actually eat themselves to death on grain if left unsupervised. (N says we can’t raise sheep on Quiet Farm because they’re not committed enough to their own survival. I think he’s kidding.) 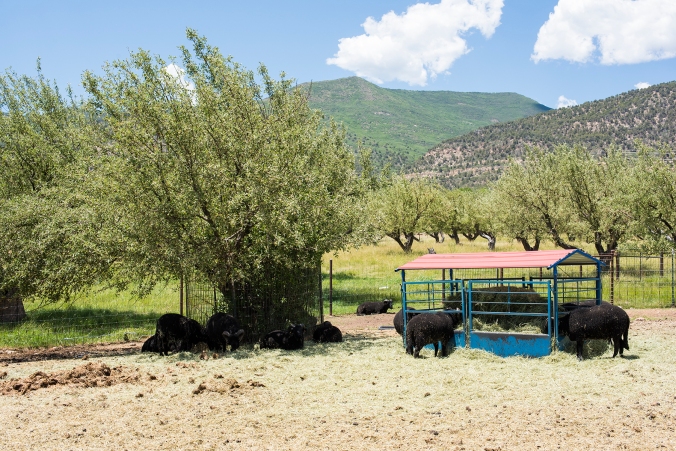 The property has hundreds of heirloom apple trees, which provide much-needed shade for the animals.

Oogie and Ken believe that “it is our responsibility to use as much of the animal as we can and we take our responsibility seriously.” The entire animal is utilized, including the horns, and the manure is turned into fertilizer popular with local gardeners. In addition to meat, Desert Weyr sells a selection of raw fleeces, washed and carded roving (long, narrow fiber bundles), spun yarn and even sturdy, warm hiking socks.

The rich fiber is very popular amongst spinners and weavers.

Good guard dogs are imperative to running an operation like Desert Weyr. The dogs aren’t caged as you might think from the photo – they spend their entire lives in the sheep pens and on pasture protecting the livestock.

Thanks, Oogie, for hosting our visit to your beautiful property! Learn more about Desert Weyr here.