As recently as three or four generations ago, the vast majority of seeds planted in home gardens were saved from year to year. Gardeners learned what plants thrived in their unique microcosm, and they might have saved seeds from the earliest beans, or the largest cucumber, or the most delicious tomato. Season after season, these saved seeds protected plant diversity, acted as a hedge against famine and in many cases were so treasured that they were sewn into hems of immigrants’ clothes when they traveled – voluntarily or not – to new lands.

A few samples from the Quiet Farm seed bank.

Now, we think nothing of buying seed packets every growing season. Wintertime brings glossy seed catalogs to the mailbox, filled with mouth-watering descriptions of intensely flavorful tomatoes, trendy kalettes, or spicier peppers. We page through these during the dark, cold days, eagerly anticipating the chance to get our hands in the soil once again, and often we order much more than we need. Most home gardeners have a wealth of seeds left over from previous years, and even this abundance doesn’t stop us from buying just a few more. They’re just tiny packets, we reason. A few more couldn’t hurt.

Along with so many other skills (sewing! canning! financial independence!) that we’ve abandoned in the First World Consumption Quest for bigger/faster/disposable/more, we’ve lost the ability to save our own seeds. Many gardeners might not even realize that it’s possible to save seeds, and we can just buy them anyway, so why go to the trouble of harvesting and saving them? As with most questions of this nature, the answer comes down to profit, and the fact that we’ve once again enthusiastically surrendered control of something we need to survive – food – to corporations who are only too happy to exploit that need.

Seed breeding and growing is an immensely complex topic that can’t be easily summed up in a flippant blog post. But to return to the oversimplified basics of high school biology, know that most food crops can be separated into either hybrid or heirloom varieties. Hybrids have been crossbred from two or more parent plants to produce certain desirable qualities; this essentially means that saved seeds from hybrid crops won’t reproduce true, because they’re genetically unstable. Heirloom varieties are open-pollinated and have been saved for generations and should, in theory, reproduce true. So you can save the seeds from your juicy, sweet Mortgage Lifter tomatoes and expect them to produce roughly the same tomatoes next season, but saving the seeds from the mealy, bland Florida tomatoes commonly sold in grocery stores won’t yield much. And why would you, anyway? Heirlooms become heirlooms because they’re worth passing down. 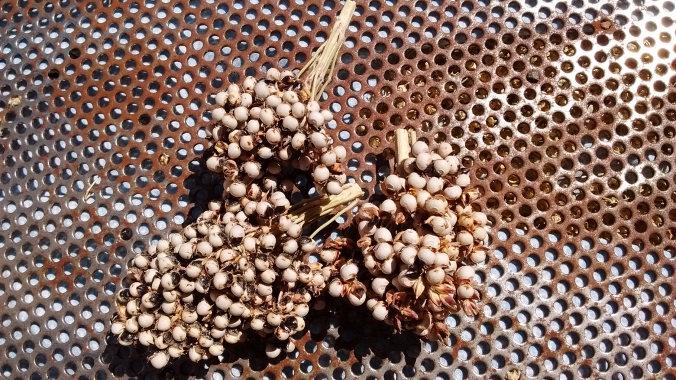 These sorghum seeds will be sorted with a mesh sifter.

Hybrids are developed primarily for reliability, shippability and consistency, and almost never for taste. Commercial growers want crops to ripen at the same time and produce similarly sized fruits that are identical, season after season; our modern grocery store’s produce department is based entirely on this model. Home gardeners, on the other hand, hopefully consider flavor a priority over all else, and since they have the luxury of eating the crops whenever they’re ripe and never transporting them more than a few yards, they can choose the best. Hence, a resurgence in seed companies like Seeds of Change, Seed Savers Exchange, Baker Creek and others that specialize in unusual, hard-to-find heirloom fruits, vegetables, herbs and grains.

We’ll get into GMOs in greater depth in a future post, but for the sake of this discussion, know that farmers who choose to plant GMO seed (mostly corn, soy, cotton, canola and sugar beets in the U.S.) must purchase new seed every single year. The very nature of GMO seed means that it is not open-pollinated and therefore cannot be saved, so these crops provide indefinite income for the seed companies who own the patents. In 1985, the first utility patent granted for a plant was upheld by the U.S. Supreme Court, meaning that it is now illegal to save, share or breed more than 17,000 patented plant varieties. Once we start trademarking our seeds as intellectual property, thereby restricting our ability to produce food in a manner our ancestors have done for centuries, our autonomy diminishes quickly.

Shell beans are an easy seed to save.

Today, nearly three-quarters of all seeds planted in the U.S. – both unmodified and genetically engineered varieties – are privately owned and controlled by three large agrichemical corporations. Growing food is a basic human right, and we are quickly moving towards a future in which we will no longer own the source of our food. Lack of food leads to hunger, which leads to unrest, which leads to revolution, which leads to profitable wars benefitting those same corporations. Building our own seed banks, even if technically illegal, means we still have some say in our food supply. Seed saving is a small but powerful act of resistance.

Even though most of the world’s seeds are controlled by large companies, there are more than a thousand seed banks all over the world; these banks are primarily NGOs and exist as emergency back-up plans in case of environmental disaster. The Svalbard Bank, in Norway, also known as the Doomsday Vault, recently made headlines because the entrance flooded during a stretch of unusually warm weather, though the seeds reportedly weren’t threatened. Other prominent seed banks are found in Kew Gardens, in England; the Vavilov Research Institute, in Russia; and the USDA’s National Center for Genetic Resources, close to home in Fort Collins. While seed banks are a great idea in theory, the long-term viability of the seeds isn’t known; seeds have to be grown out and saved again regularly in order to properly maintain the bank’s integrity. Just deep-freezing them underneath a mountain might not be enough to keep the seeds viable in the event we need to replant everything.

In early April, I attended a stellar one-day Seed School on the Western Slope, put on by the Rocky Mountain Seed Alliance. The RMSA is a nonprofit organization working to ensure an abundant and diverse supply of local seeds for the Rocky Mountain region; they believe that “locally produced seeds yield hardier, more delicious crops. When seeds are grown, saved, and replanted in a particular location year after year, remarkable adaptations develop.” Saving seeds is an investment in an area’s unique foodshed and sovereignty, as well as a commitment to rebuilding soil health and the environment. Building a diverse regional seed bank, however, requires a group of like-minded gardeners and farmers to commit to saving, exchanging and growing out seed every season; RMSA hosted a seed swap and potluck the night before Seed School so that participants could meet, talk and exchange seeds.

Certain seeds are easy for home gardeners to save; others require a bit more effort. Most lettuces, leafy greens and soft herbs are easy to save, as are onions, peppers and garlic. The downside for most home gardeners, however, is that in order to save the seeds, the plant has to be allowed to grow out long enough to produce them – go to seed, literally. As with the colloquial meaning of that phrase, plants that have gone to seed are typically rough, spindly, straggly – unattractive, according to our collective landscaping opinion. While saving seeds from fruiting plants might be done quite easily, saving seeds from others might require a readjustment of aesthetic standards. 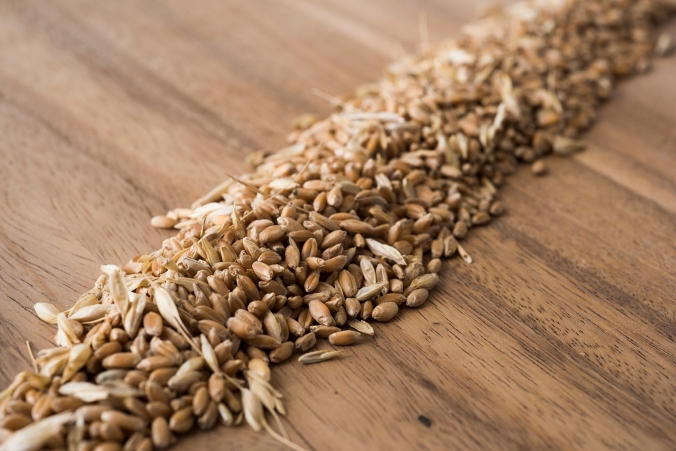 I have built up a fairly extensive seed bank, made up of my own saved seeds as well as many others I’ve obtained at swaps. Once we find Quiet Farm, we plan to dramatically increase the amount of seed we save, and the amount of plants we grow specifically for seed, since our ultimate goal is to be as self-sufficient as possible. We also hope to participate in grain trials, since local grain is often a major component missing from a regional foodshed, and if we do stay in Colorado we’d like very much to try growing quinoa, which is native to high-plains desert climates like ours.

If you have a home garden, please purchase your seeds from reputable companies committed to maintaining genetic diversity, self-sufficiency and food sovereignty. As always, the only vote that matters is the one you make with your dollars. And consider saving your own seed, just for an experiment (and to save money, too!). We may never need to rebuild our food system from scratch, but it’s a good skill to have, just in case.

17 thoughts on “Sowing the seeds”