Back in the Ye Olden Days, N and I worked on boats. One of these boats – the one we met on – was a scuba diving liveaboard that plied the waters between St. Maarten and St. Kitts, in the Netherlands Antilles. Much of our history together, along with thousands of other people, was erased earlier this year with the landfall of Hurricane Irma. The island we knew so well doesn’t exist any longer.

Every year, they promise the PERFECT Thanksgiving. And every year, we buy it.

On this particular dive boat, there were as many as eighteen guests and eight crew. I cooked, and N guided dives. And because provisioning in the Caribbean is never easy, the weekly menu was set by the home office, and it was the same, week in and week out. We had Taco Night, and a barbecue, and because most of our guests were American, every Thursday was a full Thanksgiving spread. Because – trust me – there is nothing you want to eat more in the middle of a humid Caribbean July than the heaviest meal known to man. Every. Single. Thursday.

We’re so rich in this country that we will give you a free turkey!

I’ve cooked well more than fifty full Thanksgiving meals in my time on this planet thus far, and I’d like to state here and now that I am done. Unsurprisingly, N cannot stand the meal either. I’ve talked about this before in my classes – how much I really, really loathe this season – but this year, it’s worse than ever. I simply cannot embrace the excess. The waste. The sheer, utter, obscene overconsumption just for the sake of pointless tradition.

Over two hundred million pounds of food will be thrown away on or shortly after Thanksgiving. The USDA conservatively estimates that over one-third of all turkeys raised for this one day will be thrown out, uneaten. These animals lived a horrible life and died for nothing. This is the season both for abundance and for waste, when we’re both begged to donate to hundreds of needy charities yet told at every turn that we need to buy more, eat more, consume more. I can no longer support America’s most gluttonous holiday: we’re the only country in the world that celebrates Thanksgiving, and we do so with such little regard for the shocking overconsumption that we promote to the rest of the world. And then there’s the day after Thanksgiving. 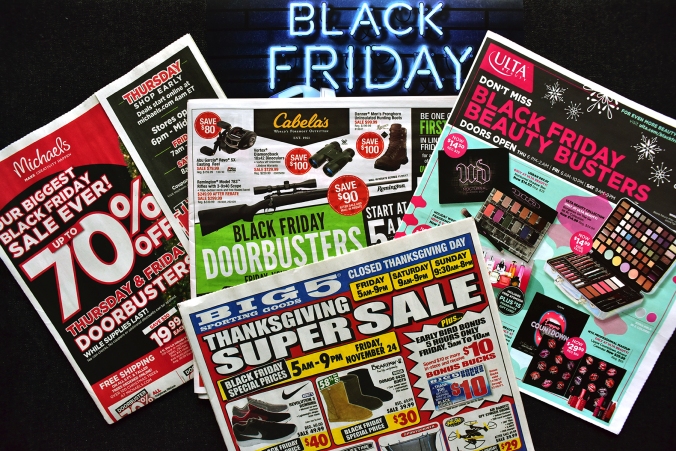 Because nothing says “giving thanks” like buying a bolt-action rifle on Black Friday.

A holiday devoted to proudly eating oneself into a “turkey coma,” followed by camping out so we can buy ever-larger televisions or the latest iPhone? Or a new gun? What is there to celebrate, honestly? While this holiday may have actually originated as a rightful celebration of having enough, now it’s about having more. More of everything. More food, specifically the dishes we just “have to have at the table.” You know, Aunt Mildred’s casserole that everyone secretly hates but it’s tradition. And so it sits there, congealing, and is quietly thrown out at the end of the evening because no one, no one wants to take it home. Or the two meat main courses, because everyone really needs both ham and turkey. And everyone really needs eight different side dishes. And everyone really needs three desserts. And everyone really needs to throw all this excess food away on the Sunday evening after Thanksgiving because, quite frankly, everyone is f*ing tired of looking at it.