Oh, have we mentioned once or maybe twice that we love food tours? In every city we visit, if there’s a food tour on offer, we’re on it – and Berlin was no exception. Thanks to Margot at Secret Food Tours for introducing us to Berlin’s classic street food!

Our first stop was a classic shawarma joint; for those of you who didn’t grow up in Europe – or in a city with a strong Middle Eastern influence – shawarma is grilled meat on a spit, slowly roasted and shaved for serving in wraps and sandwiches. Shawarma can be chicken, goat, lamb or beef; ours was brightly seasoned chicken, thinly sliced and served in fresh Turkish flatbread with crunchy lettuce and a tangy, garlicky yogurt sauce. (Want to try your hand at home? Start here.)

This is our kind of bar. 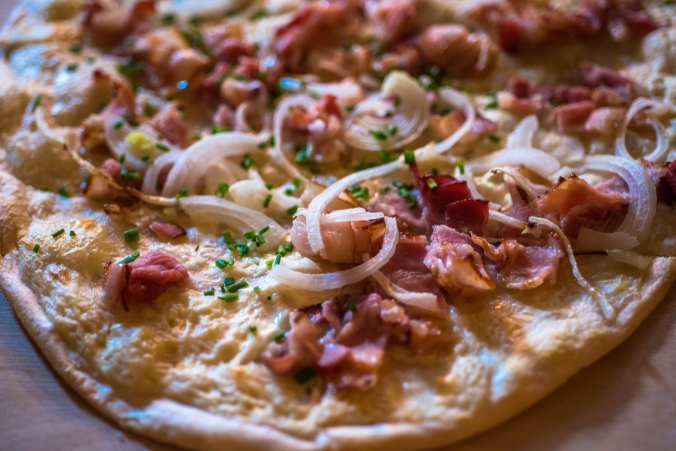 Flammkuchen is a great reason to come to Germany.

Our next stop was a cozy, dark neighborhood bar that specialized in flammkuchen, also known as tarte flambée or Alsatian pizza. This was truly one of the best things we ate in Berlin; it’s a crisp crust topped with crème fraîche, smoked bacon, thinly sliced onions and chives. It sounds just okay, but it’s actually spectacular. We ordered a second one. 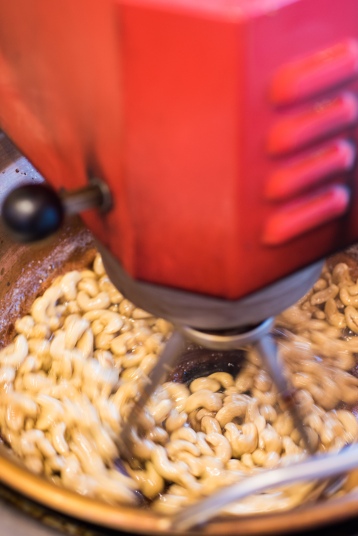 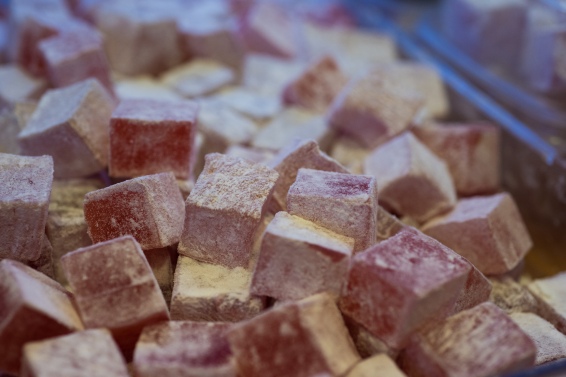 Edmund sold his soul to the White Witch for this confection.

Then we were off to a traditional Turkish sweet shop. The Turkish population in Germany is second only to Turkey itself, hence the astonishing number of Turkish restaurants and shops. Here we sampled roasted nuts and true Turkish delight, a treat famous to fans of the Chronicles of Narnia books. While popular in the U.K., Turkish delight has yet to catch on the U.S. It’s a gelatinous confection of sugar and cornstarch and sometimes rosewater or other flavorings, and it might be something you have to enjoy as a child to fully appreciate. 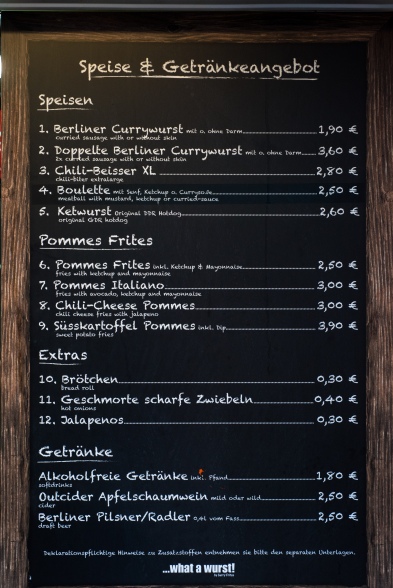 Once we finished our sweets it was time for currywurst, a uniquely German fast food option. As the legend goes, the heretofore unknown Herta Heuwer is credited with inventing currywurst in 1949. After the war, delicious food was obviously in short supply; Frau Heuwer is said to have obtained ketchup (or maybe Worcestershire sauce?) and curry powder from British soldiers still stationed in Germany. She combined these ingredients into a flavorful sauce to pour over grilled pork sausages, and the cheap but filling street food snack became legendary in Berlin. Today, it’s a classic workingman’s lunch, and of course it’s immensely popular with hungry and inebriated crowds spilling out of the bars at last call, too.

Finally, we enjoyed schnitzel at a true dive bar. Schnitzel can be made from veal or chicken, but is always pounded flat and breaded, and served hot and crispy and salty with sharp, vinegary coleslaw, plenty of fresh lemon and of course German pilsener to wash it all down. Braving a frigid Berlin winter made us appreciate the rib-sticking food the Germans are known for, and as always, we loved tasting the dishes that make this city special.