We’ve just passed the one-year anniversary of our round-the-world adventure, and it’s been nearly six months since our winter trip to France and Germany. Although we’ve totally upended our lives and moved into an RV, at the moment that isn’t creating much in the way of compelling content. Instead, we thought we’d share some travel photos that haven’t yet made it on the blog. 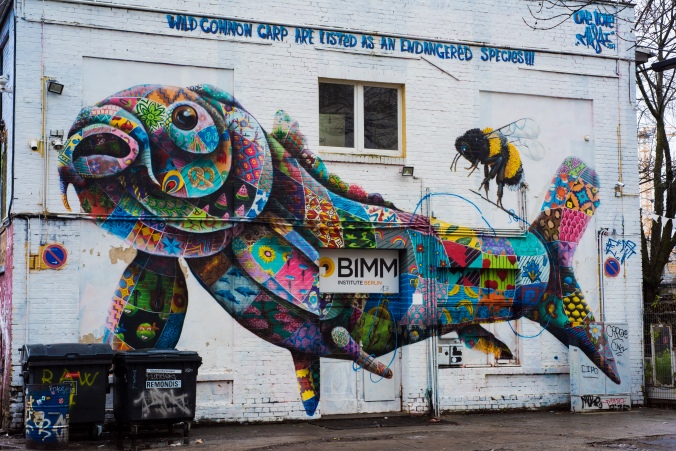 One of the things we loved so much about Berlin was the stunning array of street art. Berlin’s street art tradition is now known worldwide; the city was recently designated an official City of Design by UNESCO. (Oddly, Detroit is the only U.S. selection.) 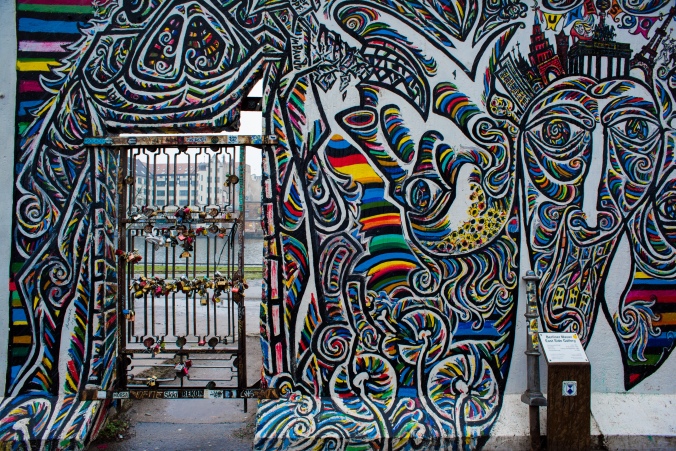 The vibrant street art culture is widely thought to have developed in response to the Berlin Wall, which was initially a rudimentary barbed-wire fence. In the eighties, however, “the initial barbed wire fence introduced in the 1960s grew into a sophisticated security system of concrete walls, electric fences and guard towers, separating the East side from the West, embodying all the anxieties of the Cold War in the most concrete of senses. During the eighties, the wall was reconstructed and raised to 14 feet tall, which made it a perfect message board, a blank canvas for artists and dissatisfied individuals of West Berlin to express their opinions and affiliations. The initial impulse to paint on the Wall came not from the Berliners, but early settlers in the American-occupied sector consisting of draft resisters, anarchist punks, and Turkish migrants, who used the wall to express their thoughts and beliefs.” -Berlin Street Art History 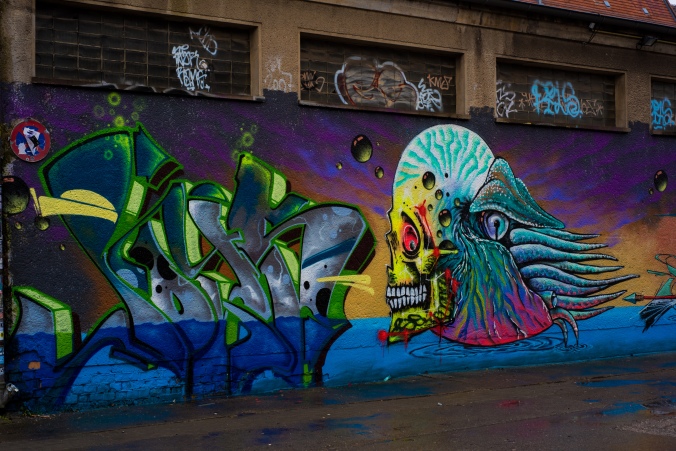 “The Berlin Wall also became the meeting point for the first generation of graffiti writers, some of them children of U.S. servicemen, who brought the booming spirit of their local graffiti culture to West Berlin. It is one of the main reasons why initial graffiti writings were heavily influenced by the New York graffiti scene. As the paintings on the west side of the Wall flourished, the east side was left with the blank, sterile wall surface, where free artistic expression on the one side became a marker of social and cultural differences of separate societies. All this changed after the fall of Berlin Wall in 1989, when the city as a whole became a playground for artists of both sides and street art scene thrived in the atmosphere of newly found freedom.” -Berlin Street Art History 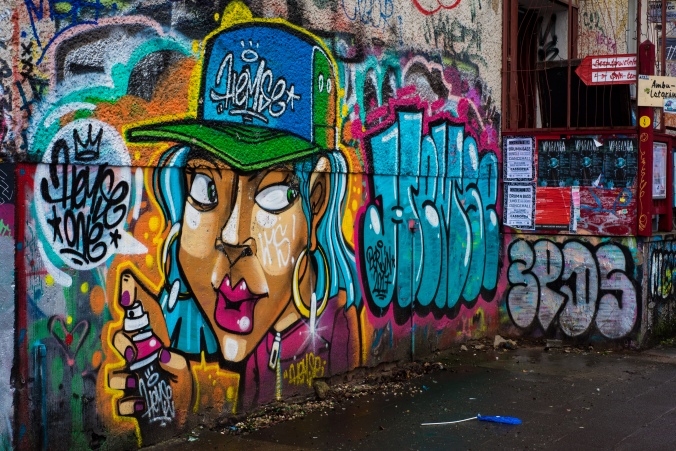 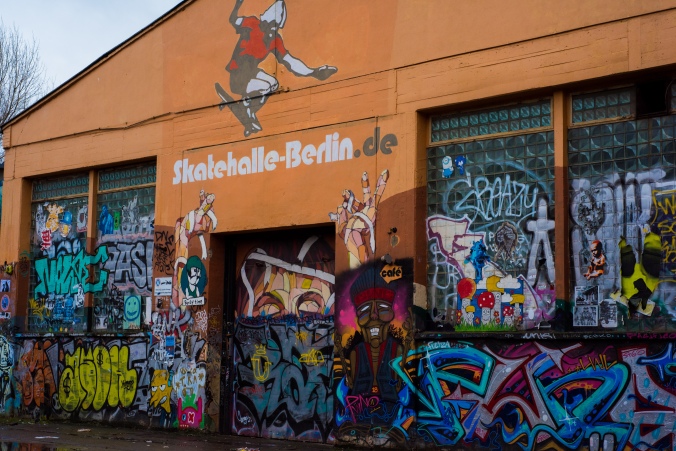 Today, Berlin is considered one of the most innovative and openminded cities in Europe, especially when it comes to gay rights. Fashion, music, photography and every other conceivable method of artistic expression flourish here. The city is rich with life and with creativity, but much of the street art still carries strong and direct political messages; the messages just may not be immediately apparent to the casual observer. 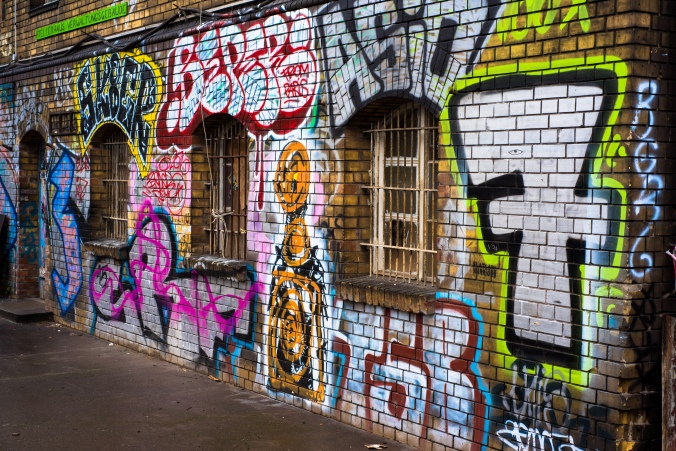 Many of the most sought-after muralists are given free rein to paint on buildings, bridges and walls, and the street art is certainly part of what attracts tourists to Berlin. Street art – no matter how beautiful – is obviously vandalism if permission wasn’t granted, and Berlin’s gritty displays often make it difficult to determine what qualifies as art and what is simply the work of destructive hoodlums. Or do the two categories overlap? 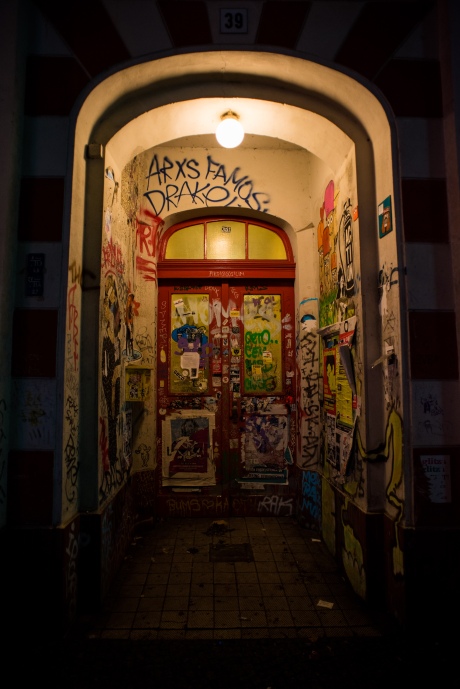 One interesting fact we learned on our walking tour of Berlin is that graffiti is still an act of protest here. On certain streets, we would see specific shops or homes or businesses absolutely covered in spray paint, while others remained perfectly clean. Our guide shared that these particular street artists are protesting Berlin’s rapid gentrification. Therefore, if they find out that a certain building has been purchased and longtime residents or shopkeepers forced out by rising rents, they’ll tag the building every single night. Every. Single. Night. Whether or not it’s scrubbed off the next day, they’ll be there again.

5 thoughts on “Interlude: The writing on the wall”