Our house is filled with books. On shelves, stacked by the bed, in my office…the only place that doesn’t contain any books is the kitchen. N reads a lot of military history mixed with an eclectic selection of farming books and autobiographies, and my choices tend to be modern fiction plus just about anything on food. I feel as strongly about books as I do about food: if they’re not good, I won’t finish them. I have no sense of obligation having started a book; there are simply too many stellar books out there to waste time on the appallingly bad ones. I’ve written before about how choosing books for our trip was one of the toughest parts of packing; I didn’t care at all about which tattered shirts and frayed cargo pants I brought, but I cared a lot about the reading material.

Because I talk a lot about food politics both here and in my cooking classes, I’m often asked for book recommendations. I’ve put together a compilation of some of my favorite books on food politics and America’s desperately compromised food system. Know that there are many more great selections out there, and if you have recommendations for books I haven’t included, please share them! If you’re looking for an even more comprehensive list of some of the best books on food politics, go here.

It is not possible to have a discussion about food politics in America without mentioning Michael Pollan. In my opinion, no author has done more to explain how what was once just “food” evolved into “industrialized agriculture.” I think Cooked is by far his most accessible work; even for me, The Omnivore’s Dilemma and The Botany of Desire get a little…technical. But really, anything by Mr. Pollan is guaranteed to get you questioning your assumptions. And if you can’t commit to reading his books, watch his Netflix series based on Cooked. Plus, his breathtakingly simple manifesto “Eat food. Not too much. Mostly plants.” is by far the best seven-word statement on food I’ve ever encountered.

It is virtually certain that certain species of fish currently used as food will become extinct within our lifetimes; our visit to Japan’s famous Tsukiji fish market simply stunned us with the sheer quantity of seafood caught and sold every single day. There isn’t much positive that can be said about the world’s fishing industry, but this book explains it in a clear, simple manner. (Please, if you’re in the U.S. and you choose to eat fish: consider buying only sustainably caught or responsibly farmed American seafood. Or eat much, much lower on the ocean food chain, like sardines and anchovies. Whatever you do, please don’t buy farmed fish from southeast Asia; their abuse of both humans and the environment makes ours here in the U.S. look positively benign.)

One of the best and most difficult books I’ve ever read on our industrial meat supply, The Meat Racket exposes the brilliantly cruel “bracket” system used in modern CAFOs. This book is a carefully researched and shockingly grim portrait of the massive corporations like Tyson currently controlling the vast majority of America’s meat market, and of the farmers trying desperately to stay afloat in a game totally rigged against them. Read at your own risk; you’ll have a hard time buying frozen chicken nuggets after this one.

This book, published in 2001, is subtitled “The Dark Side of the All-American Meal” and could be rightfully argued as the one that started it all. No one really has anything nice to say about fast food in general; it is toxic to the people who eat it, the people who work there, the animals sacrificed for it and most definitely the planet. But it’s great for shareholders…or at least it was, until the fast food industry started slowing down after decades of growth. This is one area where there may actually be something positive on the horizon: fewer Golden Arches across our country. 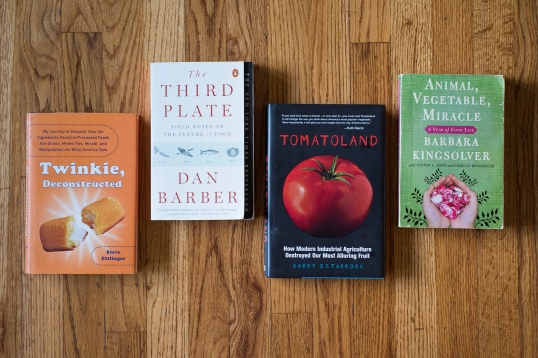 Ever been curious about sodium caseinate? How about modified food starch? Hydrolyzed soy protein? Polysorbate 60? Learn more than you ever wanted to know about how our processed food is made. (Remember, food at home is “cooked.” Food in packages is “processed.”) And we wonder why our gut microbes can no longer handle anything.

Last December, N and I had the honor of attending the Young Farmers Conference, held annually at Chef Barber’s Blue Hill at Stone Barns just outside of New York City. I’ve admired and respected this chef since his early days of farm-to-table cuisine; in the professional chef world, he is at the forefront as an advocate for less food waste and a more conscious approach to cooking and food overall. Simply one of my very favorite food books.

This book sort of pretends to be just about tomatoes and is actually much more about the workers planting and picking them, but it’s still worth a read. We’ve had out-of-season produce in supermarkets for so long that we rarely think about it anymore, but it’s not just the earth that takes a beating – the people do, too. This book almost singlehandedly brought about a very public and (somewhat) successful battle with fast food companies and supermarkets over fair pay for farmworkers; learn more here.

Kingsolver might be more known for her fiction, but when she and her family packed up and left Arizona for rural Kentucky, then documented their attempts to eat solely from their own land for a year, the food cognoscenti paid attention. It’s a deceptively simple book (with recipes!) that explains why modern turkeys can’t reproduce naturally and why organic certification is almost impossible for small farms to get and why you should bake your own bread, but there is a lot more under the surface. If you’re thinking about running away to your own piece of land as we are, this book will push you farther in that direction.

Other books I recommend not pictured here (most likely because I loaned them to someone):

Anything by Marion Nestle

Anything by Joel Salatin