Here’s what N and I have learned in the five-odd weeks since this madness really kicked off: the things we’ve been doing for years – growing food, baking bread, keeping chickens, buying only secondhand, cutting our own hair – are exactly what all of America seems to want to do right now. Listen up, everyone: we’re cool and we’re on-trend and we are probably influencers too. We’re going to call ourselves influencers, anyway. We’d like to influence you to bake sourdough, mostly because no one can find any yeast yet people still really, really like fresh bread.

I’m not at all surprised by the gardening and the bread baking, truly. People have extra time on their hands and want to do something both purposeful and satisfying, plus spring has arrived in most places and it’s a pleasure to be outside. But the sourdough thing? That did take me by surprise, as sourdough has a reputation for being so tricky and difficult and obsessive and a little weird because people name their sourdough starters and refer to them as pets. But then of course all of the country’s commercial yeast disappeared somewhere so it’s only natural that everyone would turn to sourdough, and people also need new pets in this time of isolation, kind of like Wilson in Castaway, so it all sort of makes sense.

Bread always goes on a cooling rack and not directly on the counter.

Let’s start with the basics here, in case you’re new to bread baking and aren’t quite sure what all the fuss is about. “Sourdough” is a bit of a misnomer; people assume that all sourdough baked goods naturally contain that sharp, acidic tang, made famous in places like San Francisco. But true sourdough isn’t necessarily sour, and a better name would be “naturally leavened.” It simply means that no commercial yeast was used; the bread was leavened (or raised) entirely through the magic of the bacteria that exists everywhere in the air around us. (Odd that this is trendy during a viral pandemic, no?) Those little packets of yeast you used to buy in the grocery store like it was no big deal but can’t any longer because the apocalypse is here have only existed for about 150 years. Prior to that, all raised breads were naturally leavened, because no one had yet figured out how to consistently and safely produce reliable yeast. You can thank Louis Pasteur for this discovery, among many other things.

Nowadays, traditional sourdough or naturally leavened bread is made with a starter, simply a mixture of flour and water that has been allowed to ferment according to its own schedule. Professional bakers will tell you it’s the only way to go, that you simply can’t get the best flavor using store-bought yeast. If you’re interested in jumping on the sourdough bandwagon, you could ask a neighbor to safely leave a bit of their starter on your front porch (in a container, hopefully), or you can make your own starter. This is easier in some places than others, thanks to geography – there’s a very good reason that the damp, maritime climate of northern California produces some of the world’s best bread – but a starter can be made anywhere, and yours will be unique to your microclimate just like your gut microbiome is unique to your tummy. (On that note, long-fermented breads are typically much easier to digest than quick commercial bread.)

If you want to make your own starter, whisk together about a quarter cup each of white and whole wheat flour. Add enough lukewarm water to create a mixture with a texture similar to pancake batter and whisk well. Cover loosely – you don’t want to lock out the bacteria – and let sit in a reasonably warm place, like near the oven or a sunny window. After a couple of days, you may see small bubbles in the mixture. This is great news, because it means you’ve captured some good bacteria!

Discard half of the mixture into the compost pile – DO NOT, under any circumstances, pour this down your sink unless you’re also keen to learn advanced plumbing while on lockdown – and add equal parts white and whole wheat flour, plus enough water to keep the consistency consistent. Keep doing this until your starter rises and falls of its own accord and you’re feeding it twice a day; this may take five days, or two weeks, or more, or less, but who knows because we’re all quarantined and it’s April 237th and time has lost all meaning so it doesn’t really matter anyway. (Seriously, though, it takes longer in arid climates like Colorado than it does in humid climates like near the ocean. I’ll bet the ocean is nice right now. But we don’t know. Because we’re quarantined. So we’ll bake instead.)

Parmesan sourdough biscuits are perfect with minestrone on a cold, blustery spring evening.

As with all things food-related, people really love to overcomplicate sourdough. They tell you that you have to be on a precise feeding schedule, and if you vary by more than a minute, the world will end. I’m pretty sure the world is actually ending right now and I’m still baking, so let’s put that urban legend to rest. They tell you to precisely measure down to the gram the exact amount of flour and water you use for each feeding, otherwise everything will fall apart. I’m a huge fan of weighing ingredients for baking, of course, but the starter is just that – a starting place.

See that liquid layer? It’s alcohol, and it shows that the starter is out of balance. Pour it off, discard half and start feeding again regularly.

Make more starter if you’re baking frequently, and less if you’re a bit more casual. Keep the starter out on the counter if you’re making daily bread, and refrigerated if you’re not. (If your starter lives in the fridge, it might need a couple of days of feeding to be ready to bake again.) Starters last indefinitely if they’re cared for; mine is over twenty years old and I once rescued it out of a shopping mall trash bin and resuscitated it. That’s true, and perhaps a story for another time.

One thing that does matter, however, is that you must use at least some whole wheat (or rye) flour every time you feed. This is important because white flour is totally and completely biologically dead, and the beneficial bacteria you’re trying to capture won’t be tricked because they don’t eat carrion. You need flour that still has life in it – i.e. whole grains, with the bran, germ and endosperm – for this to work. 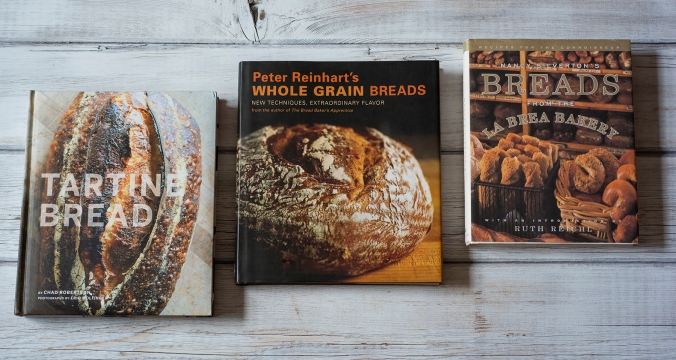 If you really want to enter the naturally leavened rabbit hole, these are great places to start.

Once your starter is built up and strong, you can use it to bake amazing breads, like this one. Your bread will taste like no one else’s bread, because your starter is like no one else’s! You can use the discard (the half or two-thirds that you throw out each time you feed it) to make waffles or pancakes or crackers or biscuits or other delicious things. You will learn how your own personal starter rises and falls, and how to adapt bread recipes to suit its temperament, and how to achieve more or less tang, and whether to use warm or cool water depending on the ambient temperature of your house. And you will join the billions of people over millennia who have made the world’s staple food with nothing more than flour, water and salt. You will release yourself from the restrictive chains of commercial yeast, and you will chuckle knowingly at those sad people bemoaning the absence of little packets of yeast in their terrifying trips to the grocery store, and you will hand them a jar of your starter (in a disinfected plastic bag and maintaining an appropriate social distance, of course) and encourage them to go on their own pilgrimage to the Magical Land of Sourdough. And you will be a better baker, and a better person, because you learned how to do something the old-fashioned way. And maybe one day you, too, can call yourself an influencer.

P.P.S. Seriously, don’t put that discard starter down your kitchen sink. I promise you’ll regret it.

6 thoughts on “The sourdough bandwagon”