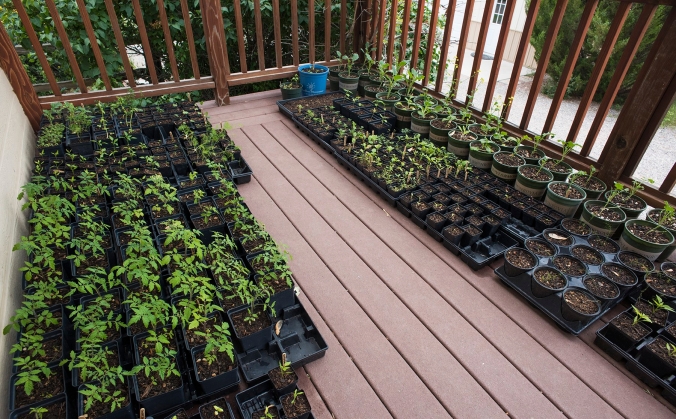 Why aren’t these plants in the ground, you say? Because our fence still isn’t finished. I know, I know…we’ve been going on about this game fence for what seems like decades; trust us, it’s twice as long when you’re actually building it. And we’re progressing, we really are – but it isn’t complete. And so these seedlings wait patiently on our sun porch, getting leggier and more rootbound every day. We’re glad this is a year focused on building infrastructure and learning, because if we actually had to harvest these crops on a specific schedule in order to make money, our season would already be shot. Most of them will thrive once they’re finally planted into raised beds, but some, like the pak choi, have already set flowers and are on their way to going to seed, so their life cycle is nearly complete. Had we known the pest pressure we’d face here, we would have started building the game fence last fall. Live and learn.

Look carefully…there are at least four visible in this photo. And probably four hundred hidden in the rocks.

Speaking of pest pressure, our resident whistle pigs have had a wildly successful breeding season. Not familiar with whistle pigs? They’re part of the large marmot family (Marmota monax), commonly known as ground squirrels, and they’re related to woodchucks, gophers and prairie dogs. They do actually whistle to warn their brethren of impending doom (like when we stroll down the lane to pick up the mail) and they live amongst our extensive rock collection. While they haven’t done much damage to crops yet (mostly because there aren’t any – see above), we do believe they’re orchestrating a stealthy and coordinated campaign to creep ever closer to the vegetables. They are exceptionally quick despite their awkward bulk, and they have lush, glossy pelts – perfect for a fashionable winter hat! Right now we’re offering a special: come collect one rock, and you get a free whistle pig. (Some trapping required.)

We buy red and yellow storage onions in fifty-pound bags from a local farm; we eat onions in some form in just about every meal. The onions keep well, but as with every plant, they’re committed to reproducing, especially when the longer, warmer days of spring finally appear – hence these green sprouts. I collected the sprouted onions from the shed and carefully cut them open, then gently separated the baby onions inside. (Onions in home gardens are most often grown from sets, tiny bulbs that might be treated so they only sprout and mature once they’re in the ground.) The sprouts have been planted in one of our new raised beds, just to see what happens, and we’ll let you know the results later this summer!

We’re pleased to report that the seed potatoes we planted in our potato towers have sprouted and seem to be flourishing. It’s been a challenge to keep these towers adequately watered, since they’re south-facing and don’t have any soil around them to hold in moisture. We also have to drag a lengthy collection of hoses down to water them, as we don’t have our drip irrigation set up yet. But if we harvest a few dozen pounds of fresh new potatoes from these, and still have enough to save for growing next year, we’ll call this experiment a success.

And finally, we have two gorgeous rosebushes near the house that have suddenly exploded with a profusion of bright yellow flowers. They are lovely and cheerful and it’s a great pleasure when a plant takes responsibility for itself – we’ve yet to prune, water, fertilize or care for these roses in any way, yet they’re still making a strong showing with their sunny blooms. Since we’re spending so much time desperately trying to keep food plants safe and alive, it’s a precious little gift to be rewarded with hardy, independent perennials like these.

Have a good week, friends!