On a cool spring day four years ago, our friend Jim came to pick us up in his truck. We drove to a local feed store where we waited forever with dozens of other eager apiarists to pick up our new beehive. The sellers had driven down from Wyoming, where their hives and queens were specifically raised in extreme environments (mainly intense winter winds), meaning they’d likely survive their move to the Front Range. 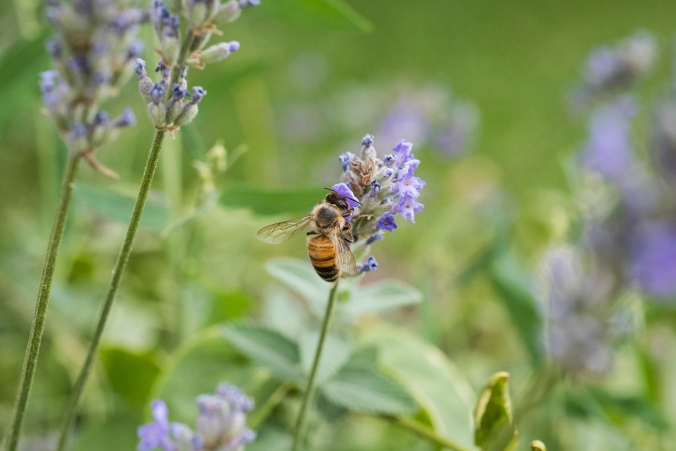 That first hive didn’t make it. We lost it two years ago, and to this day we still don’t know why it didn’t overwinter successfully. Because our neighbors’ lawn care company uses ten thousand different poisonous chemicals? Because we didn’t maintain the winter sugar water supply properly? Because of colony collapse disorder? We don’t know, and we won’t ever know. That total lack of knowledge is one of the most challenging aspects of keeping honeybees. 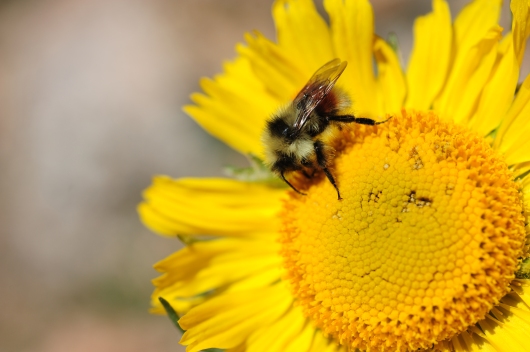 Such remarkably strong and beautiful creatures.

We are very new to beekeeping. We’re on our second hive, and though it seems to be exceptionally strong at the moment, there are a lot of different pressures on pollinators right now. We try to do our very best by our bees; we read and we talk to friends who keep bees and we monitor the hive carefully, but ultimately we’re not entirely in control of the situation. 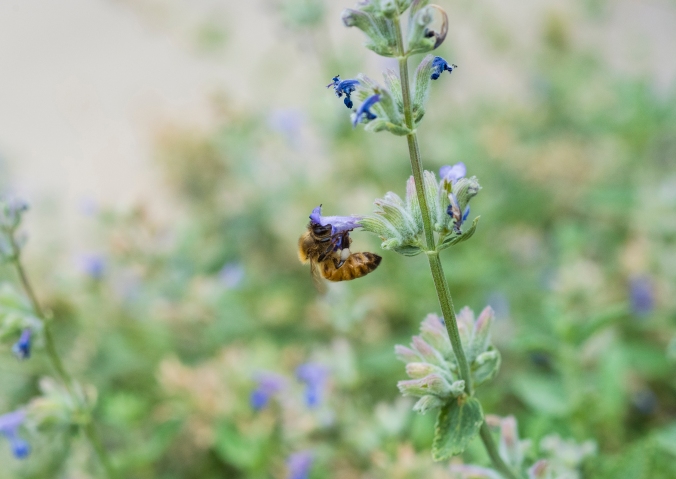 Planting flowers that bees love is one of the best things you can do to help them.

In June, the U.S. officially withdrew from the Paris climate accord. This decision sent yet another exceptionally strong message to the rest of the world that Americans are basically a bunch of nutjob flat-earthers who believe climate change is a global conspiracy cooked up by the Chinese. In challenging times like these, it’s easy to believe that nothing we do makes any difference and that we’re all doomed. Keeping bees, however, is one of our small commitments to creating the kind of world we want to live in.

Our basic hive set-up, strapped down to keep out hungry raccoons.

It’s no great secret that honeybees and other pollinators are under a huge amount of stress. Whether from loss of habitat, monocropping, neonicotinoids, or other factors, pollinators are disappearing at critical rates. One-third of our total food supply requires pollinators to thrive, and it’s only in recent years that farmers, home gardeners and scientists have started addressing this issue. Colony collapse disorder has gotten a lot of attention, but it’s still not widely understood, and the disappearance of pollinators most likely can’t be exclusively blamed on CCD. It’s a complicated story. 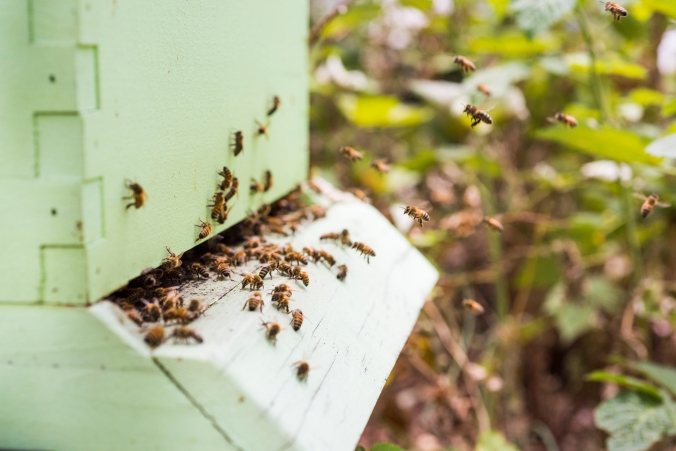 Watching the bees at the hive entrance is one of the great joys of beekeeping.

The term pollinator doesn’t refer to just bees; pollinators can also include birds, bats, butterflies, beetles and other small mammals. All of these creatures are responsible for helping to propagate certain plants, but honeybees give humans the greatest return for their investment. Honey is the only food produced by insects that humans eat, although protein derived from insects is about to become the next big trend in sustainable eating. (You heard it here first, friends.) 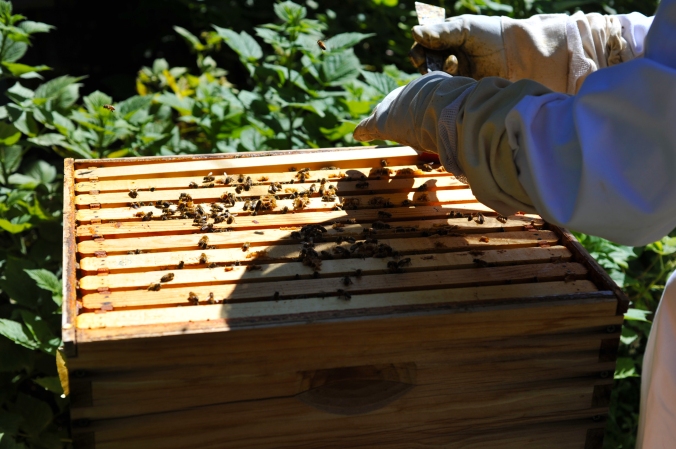 Our hive is a Langstroth; the other most common style is called a top-bar hive.

We started keeping bees to help pollinators and to help our garden, and because we know we’ll have hives on our farm. The honey is no small bonus either, especially since eating it regularly has seemed to really help N with the seasonal allergies he’s struggled with here in Colorado. Beekeeping isn’t necessarily difficult, but it does require a certain investment in time, money and equipment; we’re always trying to learn more about how we can become better beekeepers. 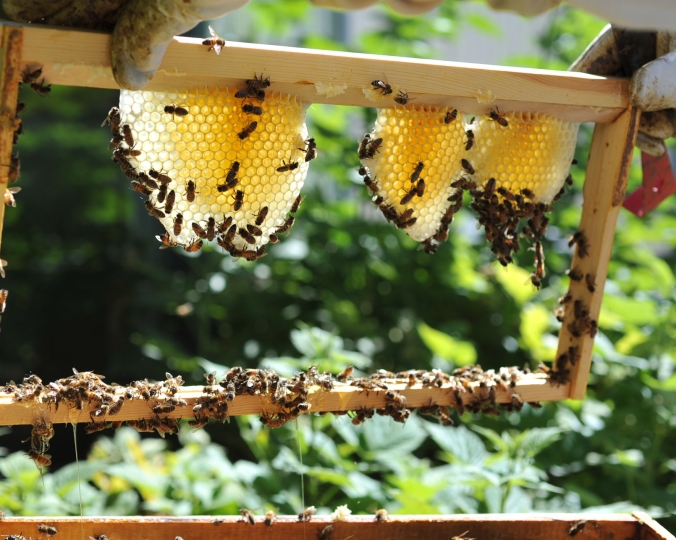 Examining built-up comb on a frame.

Beehives are unbelievably complex and elaborate communities; a typical honeybee hive usually contains about 50,000 bees. There is a basic three-tier caste system: one queen, plus workers, who are female, and drones, who are male. Drones only exist to mate with the queen and are incapable of feeding themselves or foraging, plus they die immediately after mating. Workers, on the other hand, might be nurses, attendants, cleaners, foragers, guards or undertakers. Healthy queens live for an average of two to three years but have been known to live as long as five years; workers and drones live between two to four months, depending on their role in the hive. 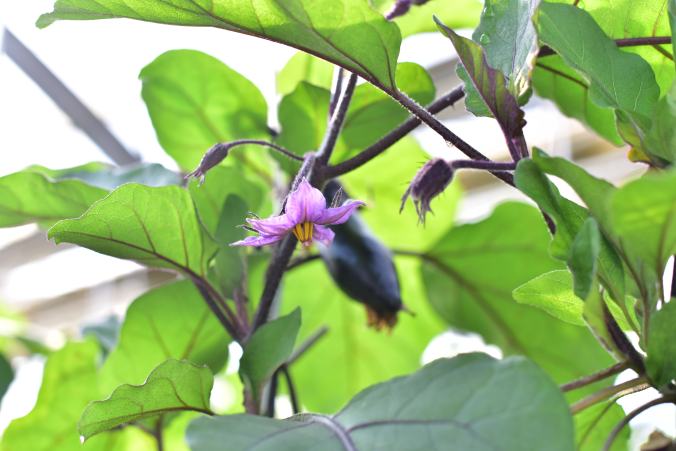 Greenhouses often have to bring in pollinators to mimic conditions outdoors.

A single bee colony can produce between sixty and one hundred pounds of honey in a year. For every pound of honey produced, the bees have visited two million flowers and flown over 55,000 miles. And each individual honeybee only produces about 1/12th of a teaspoon of honey in its lifetime, so the next time you’re grousing over the price of local honey, consider how much work went into creating it. Bees fly up to about five miles from their home hive to forage; for obvious reasons it’s tough to find true organic honey – how often can you guarantee that every single plant bees might visit within a five-mile radius is completely organic? Our honey definitely isn’t (see neighbor reference above). 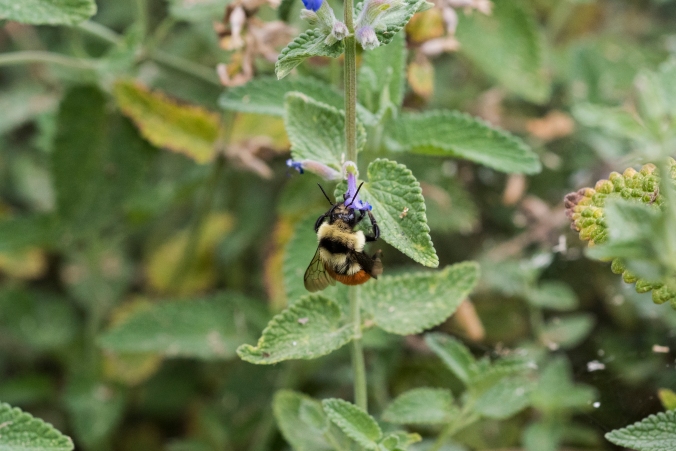 Bumblebees are easily recognizable by their plump, furry bodies.

People are scared of bees. We’re always careful to warn guests and workmen about our hive and to inquire about allergies. We’ve both been stung numerous times, some occasions definitively our fault and some entirely unprovoked. I’ve been lucky enough to actually see the bees swarm – when the hive becomes too crowded and a group decides to set off for greener pastures – which isn’t ideal for beekeepers but is a remarkable (and slightly spooky) experience. Our hive this year is also strong enough that we’ve been able to take a split, which is essentially a controlled division of the hive before it has a chance to swarm. Splits are better than swarms in most cases, because with a swarm there is always a risk of losing the queen. Unless the hive can produce a new queen, the entire colony will die. 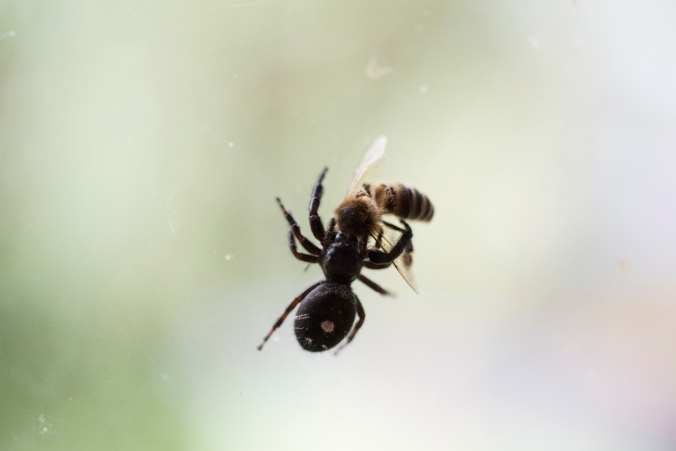 Spiders have to eat too.

To make the clear, clean honey you most often find at the grocery store, the honey is heated and filtered to remove beeswax, pollen, bee parts and other potential contaminants. Certain beekeepers claim that this heat treatment removes the most beneficial components of the honey, so some honey is labeled “raw.” True raw honey has never been heated beyond naturally occurring hive temperatures, about 95 degrees Fahrenheit, but this labeling term – like so many in the U.S. – isn’t regulated and therefore no one is checking up on manufacturers who use the term illicitly. There have also been numerous instances of honey being adulterated with corn syrup and other sweeteners; when there is money to be made someone will always find a way to do so fraudulently. As with just about every food, buy as close to the source as possible, read the label carefully and ask questions. Local honey is sold almost everywhere in the world; it’s worth seeking some out where you live. 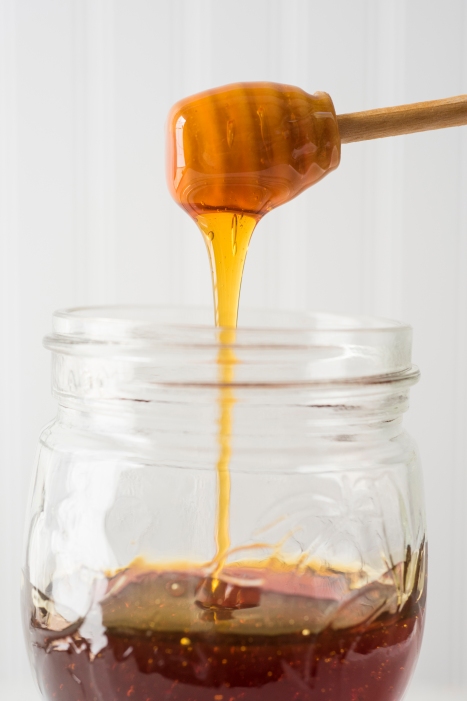 Is it any wonder this stuff is referred to as liquid gold?

In the Western world, it’s common for new mothers to be told not to feed honey to infants under one year of age. This came about in the late 1970s because it is theoretically possible for honey to contain Clostridium botulinum bacterium, which could (again theoretically) cause infant botulism. It’s extremely rare, however, and after twelve months the intestinal system has matured so that the toxin will no longer pose a risk. Considering that the bacterium is commonly found in dirt and dust everywhere, and that we regularly advocate feeding infants formula containing monocropped GMO soybeans and yogurt laced with food dye and high-fructose corn syrup, this warning against one of nature’s true pure foods seems a little panicky. As we’ve discussed, however, we love to identify a single villain rather than target the entire compromised system. Invariably we ignore all sensible advice to the contrary. 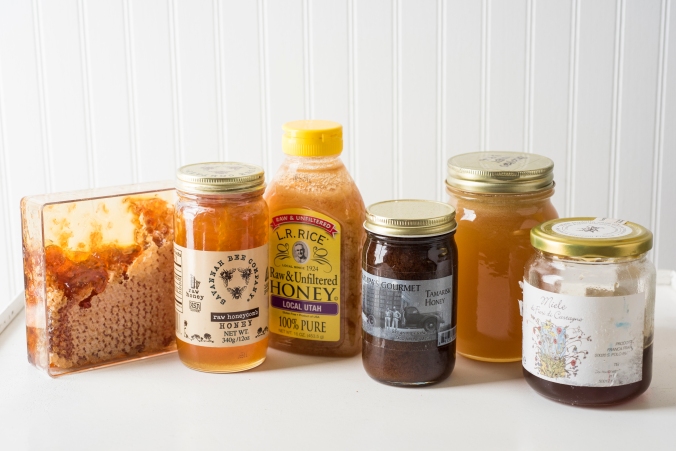 Notice the different colors; darker honey is typically stronger in flavor than lighter.

If you have the space and the inclination, please consider starting your own backyard hive. Like chickens, it’s a lot less work than people think, and the rewards are more than worth the effort. If having your own hive isn’t practical, seek out the best local honey you can find and support your local beekeepers. A farmers’ market is often a great place to find local honey, or you can try this site. If you’re buying honey at the grocery store, read the label carefully: in Colorado, I’ve seen “local honey” on products from California and other states. That might have been local when it was collected and packaged, but it’s also a very easy way to mislead consumers into paying more. Be a conscious consumer. 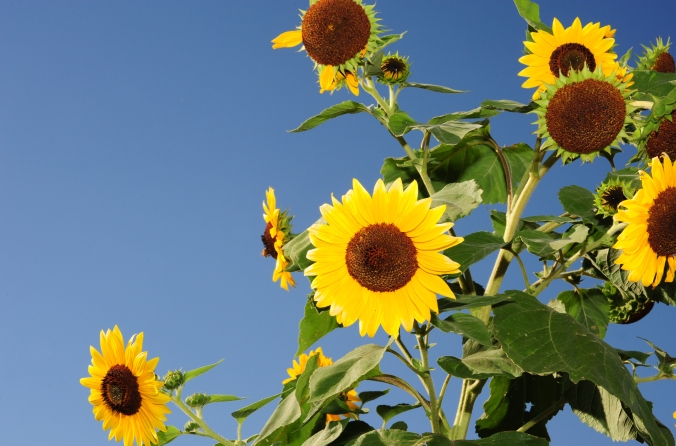 It’s easy to feel overwhelmed when faced with critical issues of this scale, but this is actually one where small actions can make a difference. Want to learn more about pollinators and how you can help? Go here, here and here.

6 thoughts on “Saving the bees”