Howdy, pardner! Are you one of the over twelve hundred people who relocated to Colorado last month (just like every month for the past three years or so, which makes us one of the fastest-growing states in the country)? If you’re new here, you might not know that January means only one thing in our town, and that’s the National Western Stock Show. Never been? Get your boots on and let’s go.

“Ladies and gentlemen, please remove your hats and stand for our national anthem.”

And then, just about the time that we hosted a historic Democratic National Convention, we decided that we’d wear our spurs and our rhinestones and our flashy belt buckles with pride. That we’d run longhorn cattle down the main street of our tiny financial district and boast about it. That we’d honor our history of open country and cattle and horses, that we’d anoint cowboys and rodeo stars as local celebrities, that we’d stand tall with our hats off to sing The Star-Spangled Banner. And all of a sudden, the stock show was popular again.

Unsurprisingly, there are lots of souvenirs for sale. These lassoes are perhaps not entirely authentic…nor functional.

The iron catwalk over the stockyards is still open to the public today, but it’s hard to capture the sheer scale of this operation in one photo.

The National Western Stock Show started in 1906; Denver was the largest cattle market in the world at that time. The grand champion steer sold for 33 cents a pound that first year, 23 cents per pound over market rate. One hundred years later, the grand champion steer sold for $58 a pound…or $75,000. Millions of dollars change hands here every year, and hardworking 4H kids can earn themselves thousands in college scholarships.

Bulls are exercised in an outdoor paddock before their show and auction.

The livestock auction hall displays vintage photos of past shows. 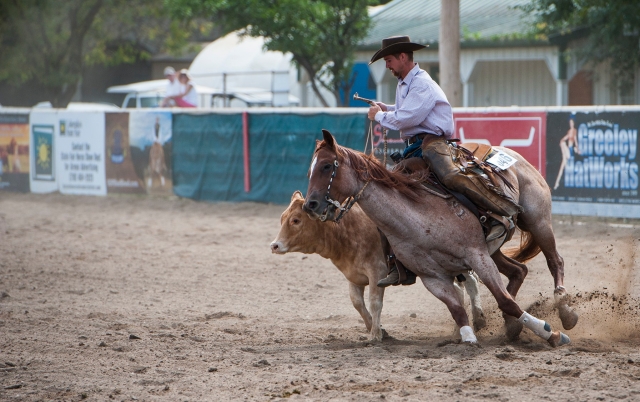 When you’re moving hundreds of animals, you need to know how to control them.

During the nineteenth century, cattle drives were a major economic force in the American West. Millions of head of cattle were moved from massive ranches in Texas to railheads and slaughterhouses in Kansas City, Denver and Chicago. The need for rest and resupply along these routes led to the origin of “cowtowns” like Denver. It could take weeks or even months to move the cattle; a balance had to be struck between keeping a reasonable pace and preventing the cattle from losing too much weight along the way, since their value was based on slaughter weight. A cattle drive typically didn’t travel more than about fifteen miles in a single day; it usually took at least ten cowboys, each with three horses, to run about three thousand head.

Both beef and dairy cattle are still exceedingly important to Colorado’s economy; they’re valued at about $4 billion per year, and our state has over 2.5 million head at any given time. Most beef cattle in the U.S. start out on grass, then are finished on grain in feedlots. (Remember that “grass-fed” isn’t a regulated labeling term. We’ll discuss this in greater detail in a future post on meat.) Colorado residents both benefit from (tax revenue) and are harmed by (environmental degradation) our powerful cattle industry. 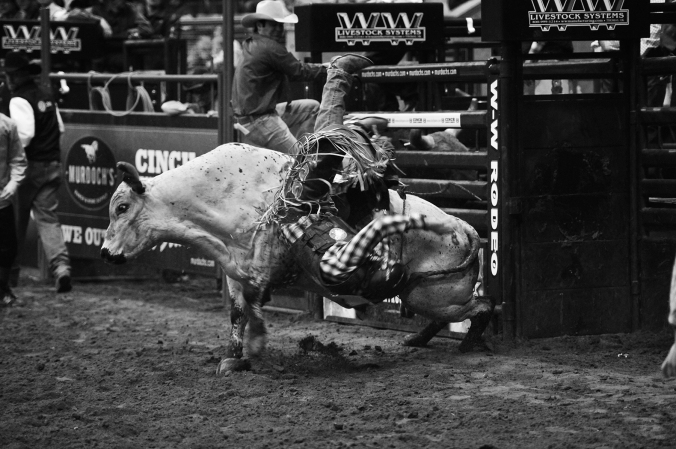 Helmets are now compulsory in almost all rodeo events.

Rodeo is a huge part of the stock show, with dozens of various competitions taking place during the fifteen-day run. Rodeo is controversial; there is no denying that many people believe rodeos are archaic forms of entertainment that should be consigned to history. We’ve written before about animal tourism, particularly in southeast Asia, and we could fairly be labeled hypocrites for supporting American rodeo while castigating Third World countries. That said, far fewer animals in the U.S. experience the alleged torture of rodeos than do the billions and billions tortured every single day to produce eggs, milk and meat for people who don’t think about where their EggMcMuffin originated. (Or we could talk about puppy mills.) It’s easy to criticize rodeo without giving much thought to all other forms of accepted animal abuse, and the entire issue is complicated because these industries are closely intertwined, plus they provide a great deal of economic benefit to Colorado and other agricultural states. In general, though, humans aren’t very kind to animals. 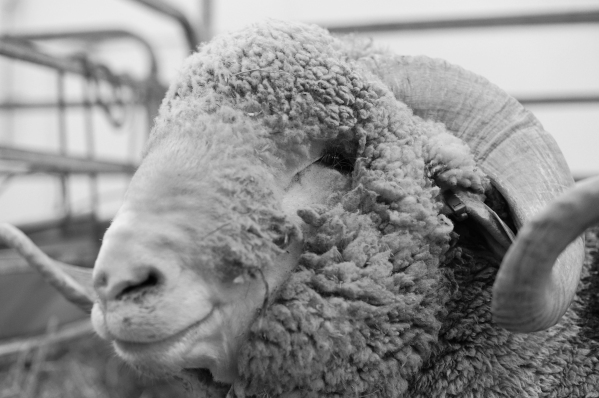 So fluffy! And yet so pointy!

Though there are more cows and bulls at the stock show than any other animal, it isn’t just about cattle. Sheep, goats, donkeys, horses, dogs, llamas, alpacas, poultry and other livestock are shown, judged and sold.

Few things are as entertaining as mutton bustin’.

Everyone needs to look their best for the beauty pageant.

Can you tell the difference between a llama and an alpaca?

Every January, you can see longhorns paraded through the streets of downtown Denver.

Rodeo princesses visit from all over the state.

Well over a half million people visit the stock show every year. If you’re looking for a true glimpse into the old West, don’t miss this classic Denver event.

7 thoughts on “Saddle up”