And in the space of a few days, our season went from lush abundance to a frozen wasteland. Such is the nature of growing food at over six thousand feet in a high-plains desert.

Our first hard frost arrived this past week, and with it a few light dustings of early snow. Up on the mesa we were thrilled to see a solid fifteen inches show up on the Sno-Tel! All of our irrigation water, of course, comes directly from the mesa, so we are always in favor of as much winter moisture as possible to boost next year’s irrigation allotment.

Temperatures dropped into the high 20s overnight, which is far too cold for summer crops like tomatoes, cucumbers and peppers. (Don’t worry, the kale is fine. The kale is always fine.) Prior to the freeze we harvested everything we could – nearly four hundred pounds on Monday alone; now comes the task of preserving all of that food to enjoy through winter and spring. The cruel irony, of course, is that once the storm passed we quickly returned to bright bluebird skies and comfortable daytime temperatures in the mid-60s, which likely means we would have gotten at least another two or three weeks in the growing season. But when a hard freeze announces that you’re done, then you’re done – and there’s not much arguing.

One of our gated pipes with the season’s final run.

Our irrigation season runs through the end of October, but we balanced our account this year to fortuitously end just before the cold snap arrived. Running irrigation later in the season is already a chilly task; combine that with a hard freeze and it can be downright miserable. We were very pleased with how we managed our irrigation in a drought year and though of course we hope for higher water shares next year, we know that with smart planning we can make even a low allotment work for our land. It’s incredible how much we’ve learned in only three short years here.

A friend’s trial orchard, where new apple varieties are tested.

Prior to the hard freeze we’d picked nearly two hundred pounds of local apples for winter storage. One box has already been transformed into applesauce; the remainder will stay reasonably fresh in one of our insulated but unheated sheds. This delicious fruit will provide snacks all throughout the winter; I’ll also bake with the apples as well as dehydrate a few pounds for adding to granola. As always, the bounty of incredible local fruit is one of the greatest benefits of living where we do.

Adelaide, Paris, Paihia and Fiji contemplating the change in seasons.

Although the damp, freezing weather makes the corral a bit of a sloppy mess, the animals are entirely unfazed by the cooler weather. They’ve put on quite a bit of fleece since their shearing, so they’re ready for winter, too.

And with that, we’re off to sort produce for canning. Wishing you a calm and peaceful week, friends.

Hello there, and a very happy new year to you and yours. If you’re here for the first time, welcome! If you’re returning after our hiatus, thanks for coming back! We look forward to sharing a new year of food and farm adventures with you.

Last winter – our first winter at Quiet Farm – our area received an unprecedented amount of snow. Our inaugural Snow Management Plan was…ineffective, shall we say; we had no tractor and no plow and no way of getting out of our quarter-mile driveway with a foot of snow on the ground. At one point, we resorted to begging a friend with a truck to flatten the snow by driving up and down our lane so we could at least leave the farm (thanks, Joe!). Needless to say, that was not a sustainable long-term solution.

This winter we haven’t had nearly as much snow, but we do have a plan – a detachable plow for our ATV. And so far, the ATV plow has worked like a champion. We’re even thinking of purchasing other implements for the ATV, so that we can use it like a mini-tractor, since we’ve been unsuccessful in finding a reasonably-priced midsize tractor to manage our pasture. Stay tuned.

END_OF_DOCUMENT_TOKEN_TO_BE_REPLACED

Gather round, kiddos, and let your crazy old auntie tell you stories about what people did down on the farm when they didn’t have these newfangled modern conveniences like “wifi” and “television” and “an actual life.” We participated in fun old-timey group activities like apple pressing, yes we did. And we have the photos to prove it.

Grassward Dairy had about a dozen mature apple trees on the property; I felt especially silly because we went grocery shopping prior to our stay there and I bought apples. Like spent actual money! And there were thousands of delicious apples, free for the taking.

This press is pretty old-fashioned…except that it’s partially electric, so shredding the fruit is quicker and easier.

One of many important foods pollinated entirely by bees.

For best results, use a mix of different apples so your cider is a balance of tart and sweet. And you don’t have to worry about bruised spots or any other damage, as the press takes no prisoners. Throw them all in. 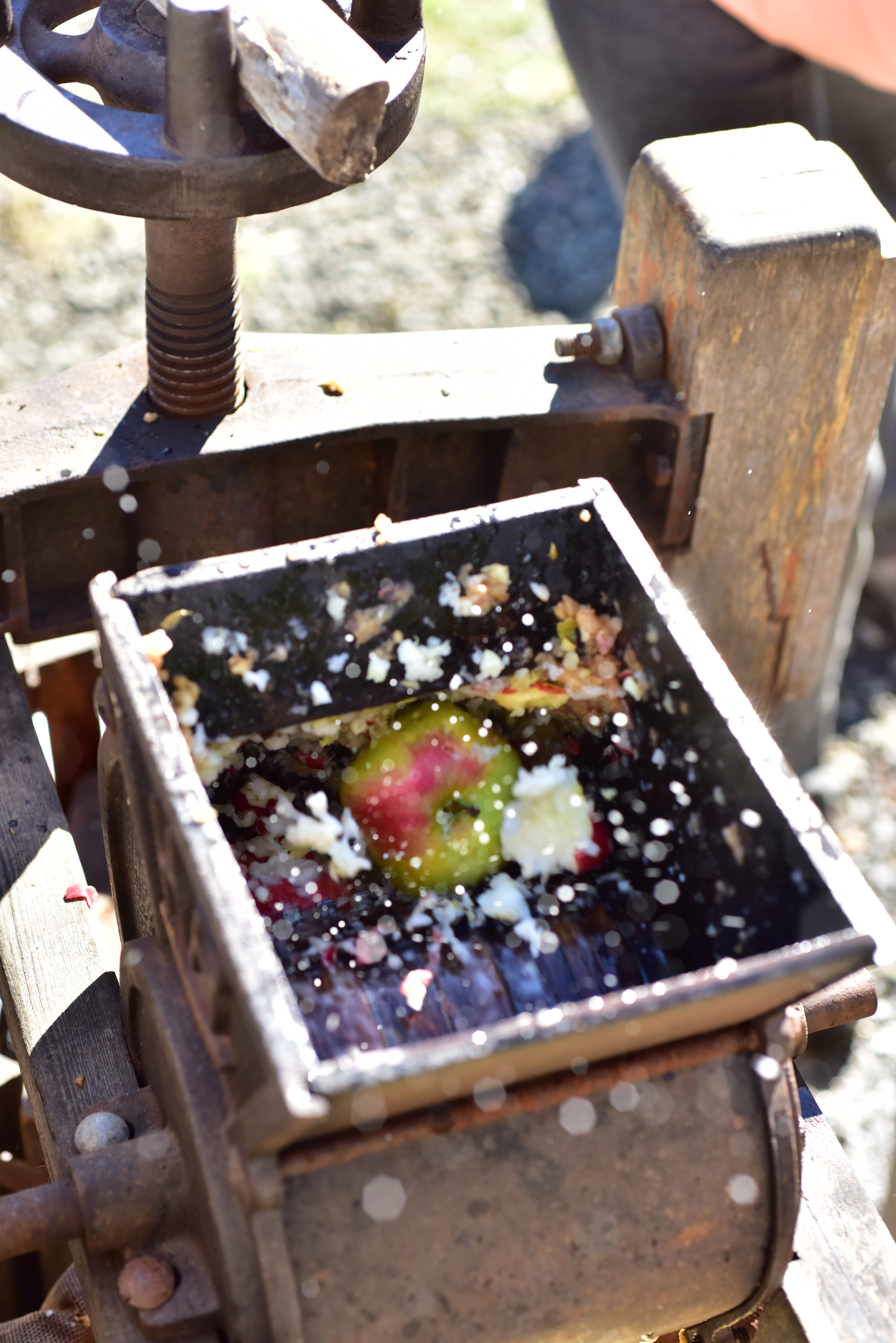 An action shot of an apple hitting the toothed shredding wheel. 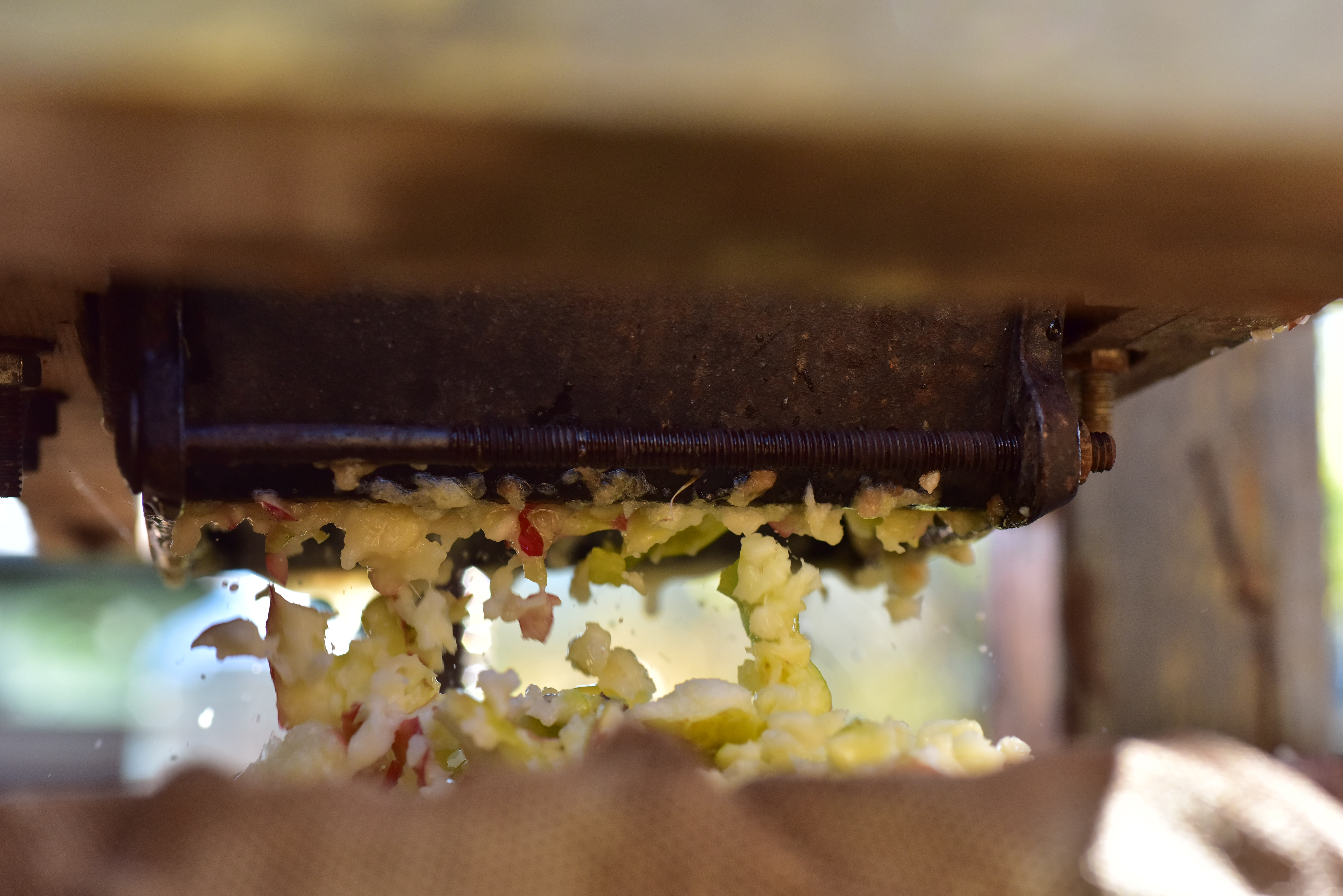 The shredded pulp before pressing.

Gravity forces the pulp into a mesh bag for pressing and straining. 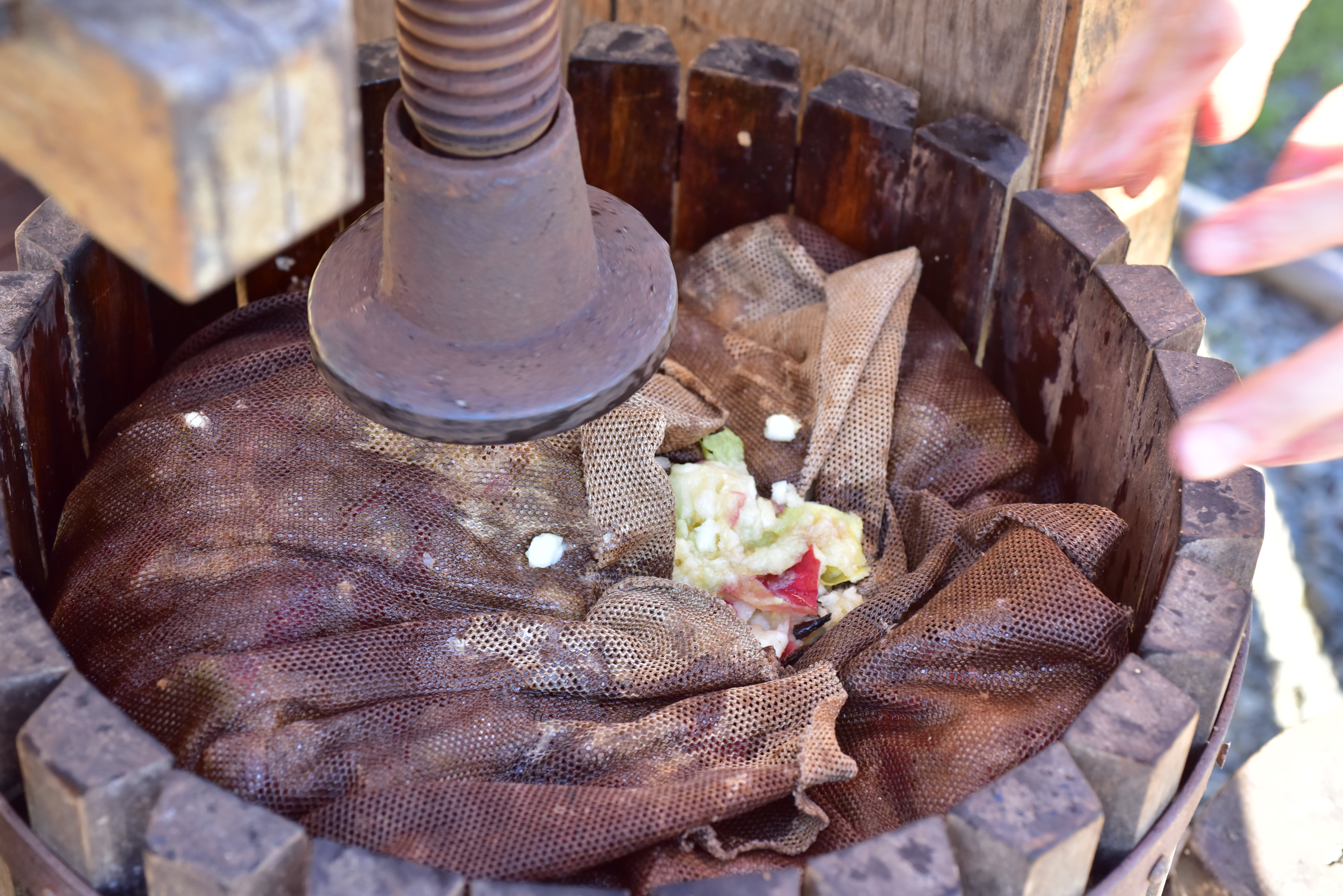 Readying the pulp for pressing.

Placing the weighted lid on the bag.

The electricity only helps with the shredding wheel; the press is still cranked by hand.

Leftover pulp is fed to the pigs. It’s like pre-marinating.

And the result of all this hard work? The most incredible apple cider you’ve ever tasted.

We pressed hundreds of pounds of apples; most of the juice was left for drinking fresh, but a few gallons will be turned into hard cider. Sadly, it won’t be ready for weeks, so we won’t be able to taste the fruits of our labors. (P.S. You can do this at home using a juicer…but it’s much more authentic if you’re fighting off aggressive wasps outside on a farm.)