It’s been an age since we’ve done a book round-up, mostly because I haven’t read much recently. For someone who typically tears through about a book a week, on average, this has come as somewhat of a surprise. I’d love to attribute my lack of reading entirely to our second full farming season, but the truth is, I did a lot of doomscrolling this year, particularly during spring and summer. This was a pointless, destructive habit that benefitted no one – did I really need a to-the-minute update on western Europe’s infection rates? – but a habit that was tough to break, nevertheless.  I also stop-started an unreasonable number of books: I’d pick something up, hoping to get lost in a story or a world, only to find that I couldn’t focus or that the book contained just as much (or more) tragedy as real life. I found myself unable to finish most of the books I began, not my normal tendency at all.

As we move from a busy summer and fall into the quieter, colder days of winter, I aim to increase my book reading and limit my news consumption. With that in mind, here are a few capsule reviews of books I’ve read recently (and not so recently, too).

END_OF_DOCUMENT_TOKEN_TO_BE_REPLACED

“It’s difficult to think anything but pleasant thoughts while eating a homegrown tomato.” -Lewis Grizzard

Although our recent cold snap didn’t kill our tomatoes, the season is definitely wrapping up. Our daytime temperatures remain warm and pleasant, but overnight lows stay steady in the low 50s, and tomatoes do not thrive in this weather; as one would expect, they start to taste refrigerated. To mark the natural conclusion of the warm-weather crops, we offer you a review of this season’s tomatoes.

END_OF_DOCUMENT_TOKEN_TO_BE_REPLACED

Bonjour, nos amis! We’re not actually in Paris, but we were one year ago! And since life on Quiet Farm is rather, well, quiet, right now, we thought we’d share some atmospheric photos from our travel that didn’t make it into our posts last year. Paris in winter is so perfectly suited to black-and-white photography that it seems a shame to let these gorgeous images languish on a hard drive somewhere.

END_OF_DOCUMENT_TOKEN_TO_BE_REPLACED

Thank you all so much for your kind words and your good wishes about our purchase of Quiet Farm. We have a ton of work ahead of us but are exhilarated by the challenge.

And in other news, if you’re in the Denver area I’m thrilled to announce that I’ll be teaching two cooking classes at Broomfield Public Library this fall! Both classes are free and open to the public, but you must register in advance due to space limitations. Please see registration details below. 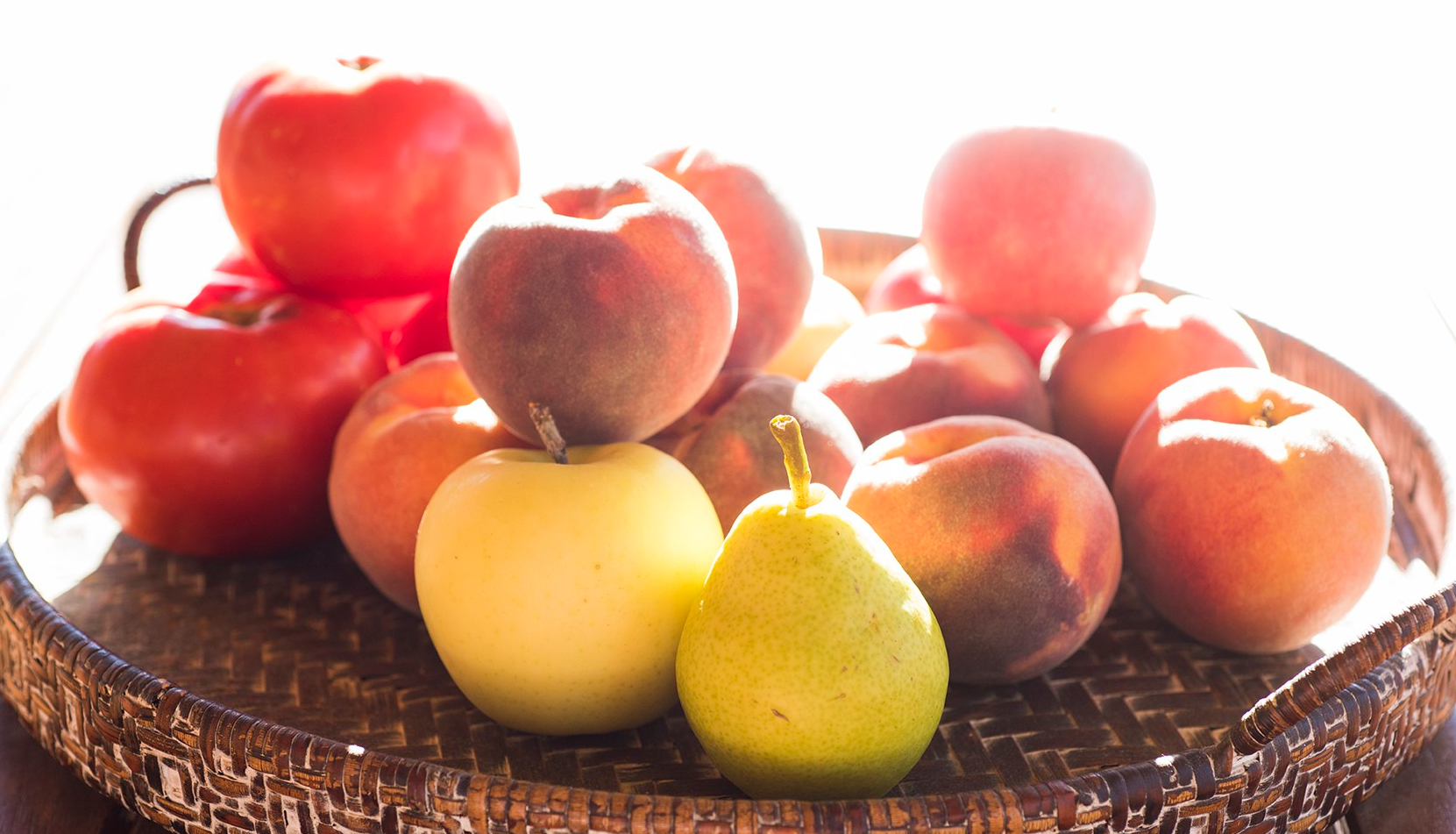 Just some of the local produce awaiting the canning pot. 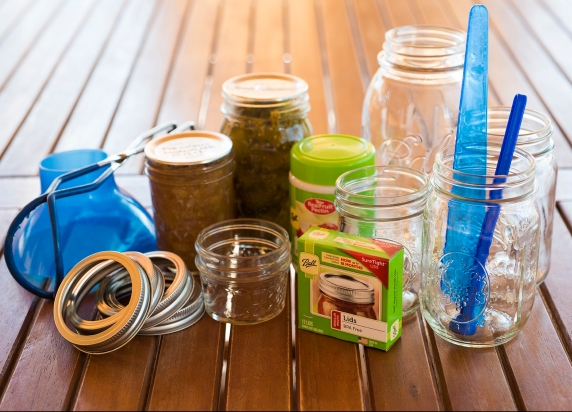 Savoring summer’s freshest fruits, vegetables and herbs well into the cold weather is easy with a little canning and preserving knowledge – and preserving is a lot less intimidating than you think. There is nothing like opening a jar of fresh, sunny peaches or rich, flavorful tomato sauce in the middle of cold, dark January! Join Chef Elizabeth Buckingham for this fun class where you’ll learn the basics of preserving, including water bath canning, freezing, pickling and dehydrating. We’ll taste lots of delicious jams, chutneys, salsas, pickles and more, and you’ll leave class ready to preserve your own seasonal bounty. Recipe handouts and generous food samples served! (Please note that class is lecture and demonstration – not hands-on – and is geared towards guests twelve years of age and older.)

What will you be for Halloween? I plan to be deeply angry about our compromised food system. Or a Killer Bear. Not sure yet.

Interested in upping your Halloween treat game this year? Join Chef Elizabeth Buckingham for this fun class where you’ll taste a variety of new Halloween treats. We’ll talk sweet and savory, snacks and beverages, and you’ll leave with plenty of great ideas for all of your spookiest Halloween gatherings. Recipe handouts and generous food samples served! (Please note that class is lecture and demonstration – not hands-on – and is geared towards guests twelve years of age and older.)

I’d love to see you at one of these classes this fall! Thanks to Broomfield Public Library for hosting my classes, and please support your local library system no matter where you live.

When organizing this impulsive trip, we gave a lot of thought not only to where we would go, but also how we’d get around once we got there. We planned on mostly using public transportation – trains, buses, ferries and so on – instead of renting cars, but in New Zealand, we wanted to rent a campervan. And we are so pleased that we did.

If you’re British, you probably get the inside joke of the license plate.

New Zealand is roughly the same size as Great Britain or Japan, but holds just over four million residents in comparison with Britain’s 64 million and Japan’s stunning 127 million. This means, of course, that there is a great deal of open country – and because food and accommodation might be few and far between, a campervan is the perfect way to explore. (It’s also called caravanning, but that’s usually only when you’re using a regular vehicle to tow a caravan that has no engine of its own. That’s commonly known as fifth-wheeling in the U.S.)

New Zealand is so friendly and welcoming to campervans; we’ve seen hundreds and hundreds of vans of all shapes and sizes during our time here, proving that it is one of the most popular ways to see the country. There are campgrounds everywhere, from basic and rustic to luxurious; most of these have small motel rooms as well as powered and non-powered sites plus places for tent campers. Amenities vary, but almost always include common showers, toilets and kitchens, and there is often a pool or hot spring too. 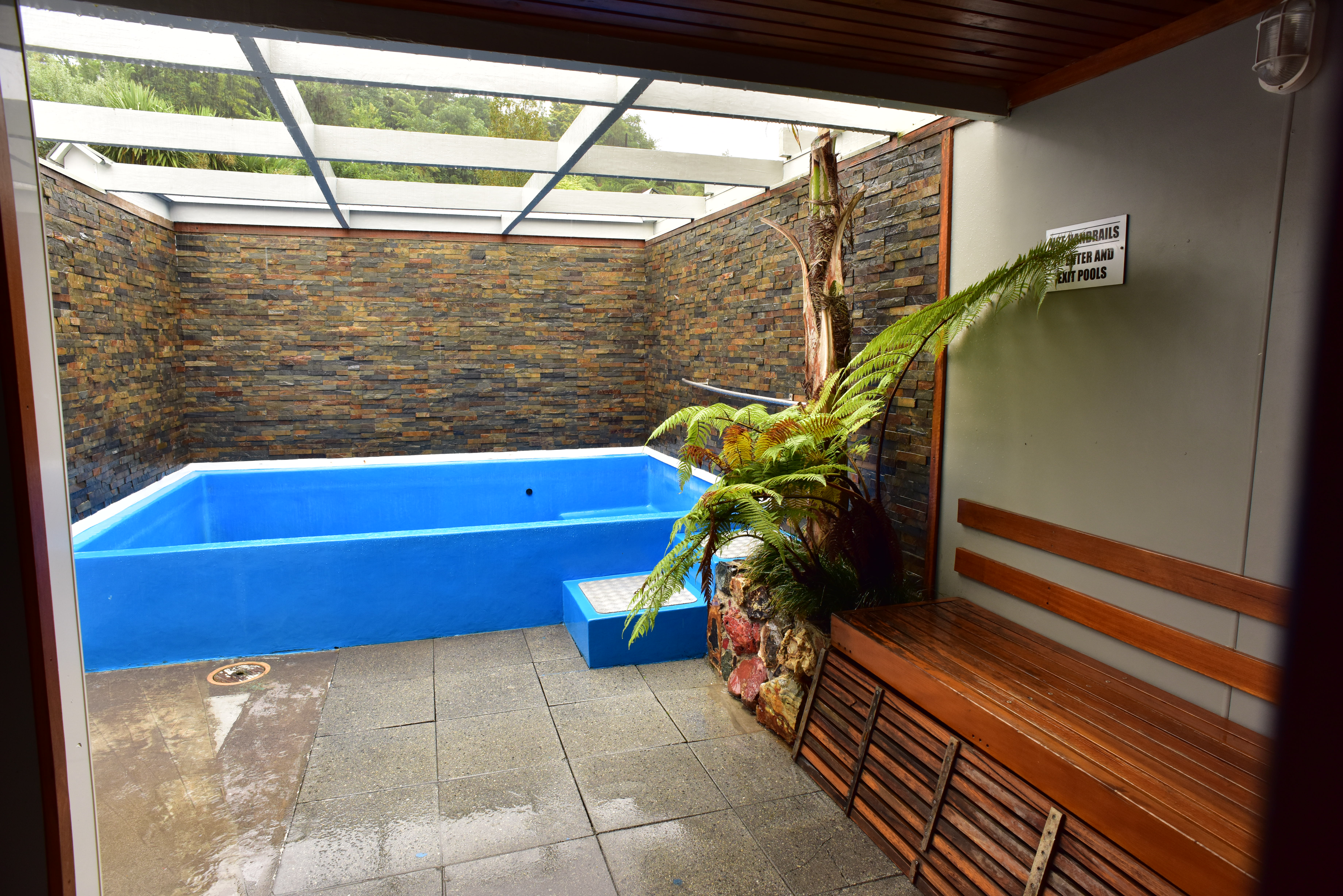 Fernland Spa, near Tauranga, offers private open-air hot spring pools. The pools are filled from the spring, then drained into the nearby estuary, cleaned and refilled after every use, eliminating the need for chemical treatments.

The greatest advantage of campervanning is definitely the flexibility. We drafted a rough itinerary before we arrived, mostly based on N’s year living here back in the early 2000s, of places he wanted to revisit or had never been. But once we got on the road, we loved being able to stay in a place longer or leave early if it suited our plans. Had we booked all of our accommodation at B&Bs and hotels in advance, there would be none of this.

One of our very favorite campsites right on the ocean in Clifton, Hawke’s Bay.

The other biggest draw, especially on a trip of this length, is the ability to save a lot of money by cooking most of our own food. While I’m not making anything fancy, I am cooking simple, delicious meals appropriate to the summery weather and what we discover on our travels. We’ve been in a lot of agricultural regions, and many farms and orchards have unmanned honesty stands on the side of the road. Signs advertise what’s available, you select what you want and put your money in the box. We’ve bought just-harvested tomatoes, dried figs, zucchini, new potatoes, tons of fruit and anything else that catches our fancy. We’ve eaten a lot of local lamb, plus fresh sausages from the butcher, and it’s refreshing not to agonize over my meat purchase for endless minutes: all of the meat is pasture-raised in New Zealand, and none of it comes from a CAFO. Even tiny grocery stores in dusty little towns have a great selection of local meat. Just being able to make our own coffee and tea saves so much money rather than buying to-go drinks every day. 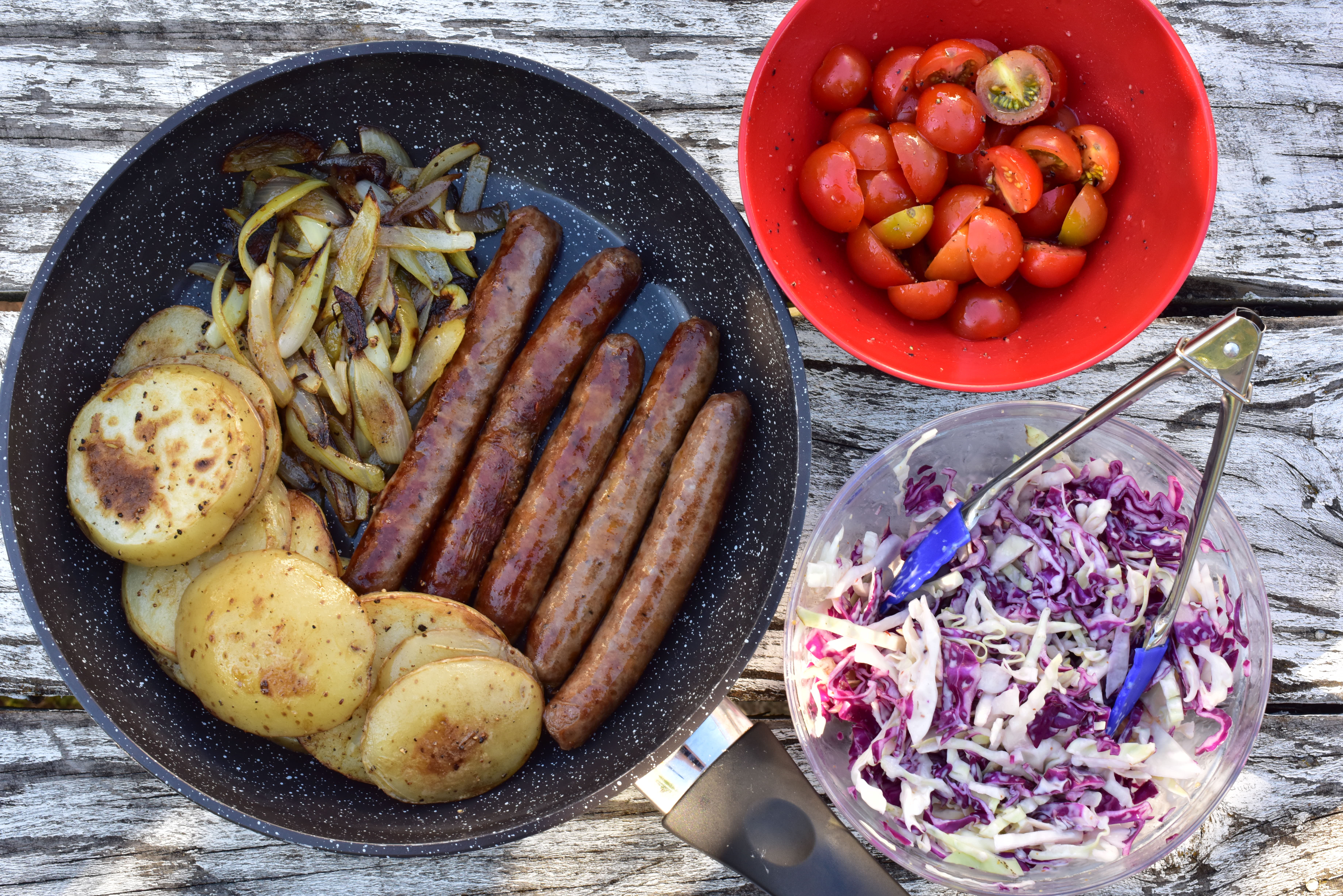 On the menu: local venison and merlot sausages, grilled potatoes and onions, fresh tomatoes with olive oil and salt, and a simple cabbage coleslaw.

As in the U.S., there are various membership programs you can join that offer discounted rates at particular campgrounds; we’ve used an invaluable (and free!) app called CamperMate to navigate our way to parks in a particular region. Freedom camping is also popular and it’s pretty much exactly what it sounds like: sleeping in a designated area for free, but without any services like showers and sometimes not even toilets. This is often not popular with local residents, however, because there have been many cases of freedom campers basically turning a lovely local spot into their own unserviced campground, and therefore freedom camping is heavily regulated and often banned outright. We’ve freedom-camped a couple of times, but it’s not always ideal for a variety of reasons.

Camping by a gorgeous river near Tongariro National Park.

If you want to travel New Zealand by campervan, do your research; it’s essential to understand exactly what size and style of vehicle you’ll be renting. If you plan on doing any freedom camping, you’ll need to be certified self-contained, or CSC. The CSC sticker allows you to stay in more remote sites where other vehicles wouldn’t be permitted, and there are definitely rangers patrolling who will issue stiff $200 fines if yours isn’t displayed. You should also know that renting a campervan isn’t cheap; when we were first researching, we were stunned by quotes of nearly $8K for our month here, and after that you still need to pay for campgrounds unless you freedom-camp exclusively. There are also diesel taxes, tolls, and hefty charges for the ferry if you want to travel between the North and South Islands. 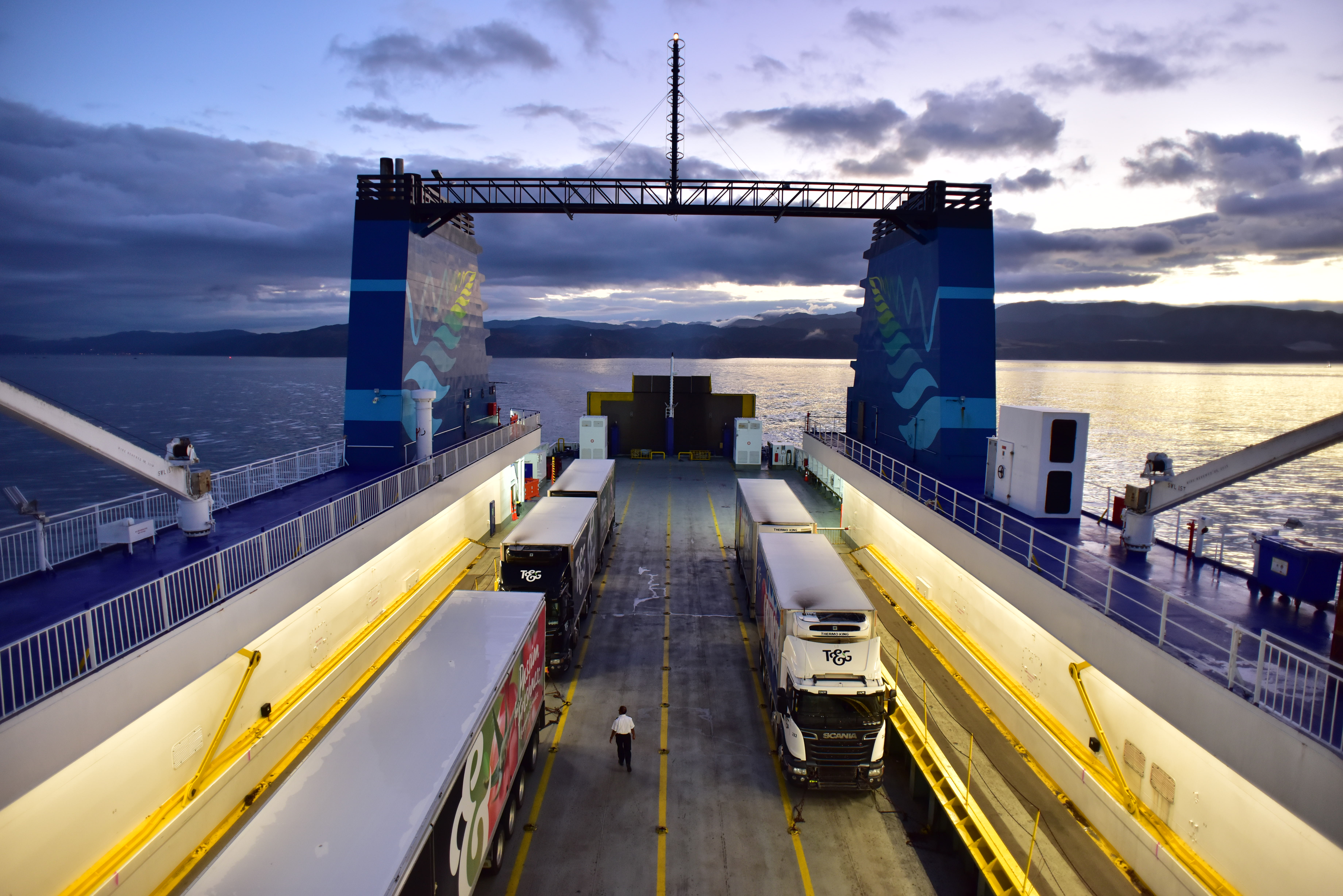 Semis at sunrise on the Interisland Ferry en route from Wellington to Picton.

For our American readers, remember that New Zealand drives on the left; unless you’re very comfortable with handling larger vehicles, you’ll absolutely want to book in some practice time in a safe area before you hit the open road. And finally, New Zealand has basically one major north-south motorway; all of its other roads are relatively small two-lane roads, especially compared to our massive flat, straight American highways. Journeys here are measured by time, not by distance; you can’t read “Auckland to Wellington, 658 kilometers” on the map and assume that will only be an six-hour journey – it’s closer to ten. It takes a lot longer to get to places here than you might expect, and the driving can be challenging and tiring with a lot of hills and narrow, windy roads. Driving a campervan in New Zealand isn’t for the faint-of-heart – but we’d argue that it’s by far the best way to see these gorgeous islands.

P.S. A million thanks to my amazing, incredible partner, who grew up driving on the left and took on the challenge of this journey with literally no help from me whatsoever. I will never be able to make him enough coffees to thank him!